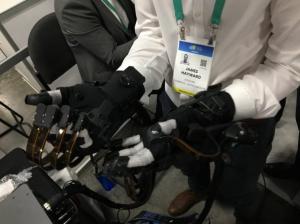 CAMBRIDGE, UK, November 19, 2021 /EINPresswire.com/ — On Tuesday 16th November 2021, the Reality Labs (RL) team at Meta (formerly known as Facebook) released a selection of media showing a prototype haptics glove product, including videos of Mark Zuckerberg trialing various demos. The prototype utilizes pneumatically controlled microfluidic systems to deliver local haptic feedback to different areas of the hand, along with what appears to be additional kinaesthetic feedback on each finger, anchored against the wrist.

Every now and again, you see a new technology product which gives you déjà vu for other products that have come before. To those that have been following the haptics industry, Meta’s prototype has several areas of similarity to the products developed by HaptX. In fact, having not seen many other examples of this technology displayed commercially, my initial instinct was to check whether HaptX had announced any partnership or relationship between the two companies. However, HaptX have subsequently released a clear statement from their Founder and CEO Jake Rubin alleging that many core aspects of the prototype “appear to be substantively identical” to their existing patented approach.

The subsequent media coverage of this story to date has been nearly ubiquitous in suggesting that Meta are in the wrong. However, the less-discussed aspect of this is that Meta hold a significant number of their own patents related to haptics in VR. This includes groups of patents filed by Facebook from 2015-2017 and granted in 2019 discussing microfluidic channels, hard/soft touch simulation, use of pneumatic bladders to form touch arrays, integration into gloves, and specific reference of use for interaction with virtual objects. Examples are as follows:

The point here is, regardless of the potential for an easy critical narrative, the simpler side of this story is showing more investment and development towards advanced haptics from a key player. The IDTechEx report on the topic shows the market growing steadily, passing $4bn in revenue in 2021 and reaching $5bn by 2025.

As an analyst at IDTechEx, James Hayward has repeatedly described HaptX’s haptic glove products as his favorite haptics demo, and the closest thing we have today to the kind of science fiction haptics which many will imagine for a truly immersive metaverse. The fact that development teams at Meta or in any other large technology companies are building and testing prototypes using this technology (as well as other promising options using EAPs, smart textiles, and more) should not come as a surprise to anyone following the space. Indeed, Meta are not the only large technology company with an interest in this area.

Either way, an announcement, which should have been a fairly routine teaser of one technology project they are working on as part of their journey towards the metaverse, has certainly achieved the effect of increasing interest in haptic technologies.

The broader context for Meta and haptics

The haptic glove demonstration comes as part of the wider rebrand, which has seen Facebook become Meta and focus their branding and technology development alike on the metaverse. Along with the headline glove demo, the announcement also saw the RL team describe a number of important and predictable technology areas that they are working in, including several areas of haptics (e.g. pneumatic/microfluidic systems, electroactive polymers, and other related areas), alignment with audio and visual feedback, and even through to related areas like smart textiles and new material development. The announcement fits very well within the current PR strategy for the company, publicizing some of the most exciting development work which will form the building blocks for the suite of hardware products which will be the physical gateway for users into the metaverse.

Regardless of any potential issue with HaptX, this announcement is great news for the haptics space as a whole. For such a large and influential company to have invested so heavily and developed high-end haptics platforms shows the broad opportunities that are available in this space into the future. This will help to spread awareness and accelerate the progress towards wider adoption of advanced haptics, whether using microfluidics or otherwise. There are many other start-ups developing new products within important technology niches, which together form the future of the haptics technology landscape. They are met by similar internal efforts and early patent development from throughout the technology giants, and testing the boundaries of each of these patents is a normal part of the process as the industry develops.

IDTechEx have been covering the haptics industry for the past 5 years, releasing annual reports covering the core technology, key players, and market sectors as they evolve. IDTechEx have also covered related areas such as smart clothing, AR, VR & MR, and more. For more information about these reports, or IDTechEx’s ongoing subscription service, please visit the IDTechEx website or email research@IDTechEx.com.

About IDTechEx
IDTechEx guides your strategic business decisions through its Research, Subscription and Consultancy products, helping you profit from emerging technologies. For more information, contact research@IDTechEx.com or visit www.IDTechEx.com.