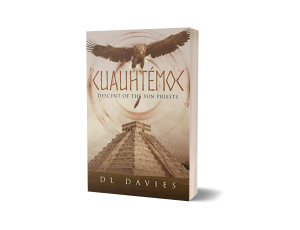 “Cuauhtémoc: Descent of the Sun Priests”

Descending Eagle’s newest flight serves us with adventure and fantasy

TORONTO, ONTARIO, CANADA, April 29, 2022 /EINPresswire.com/ — A book set in another world where adventure, mystery, and fantasy meet, author D L Davies serves us in the second installment of the Cuauhtémoc series, “Cuauhtémoc: Descent of the Sun Priests.” The series protagonist, Cuauhtémoc or Descending Eagle, goes on a journey to the City of the Emperors only to find several obstacles in his way.

An army veteran who was previously stationed in Germany, D L Davies has always had a knack for making up stories in his mind. New worlds and beings sprouted in his imagination and stories of adventure and suspense were crafted. Finally deciding to share with others his tales, he has written the Cuauhtémoc series and brings his readers to an alternate world that is both engaging and riveting. Having moved around when he was young, he has lived in several places (including Oregon, where he spent most of his youth) and had his share of adventure. Aside from writing, he enjoys outdoor activities and photography.

In the second part of the series, the titular Cuauthémoc ventures out into the City of the Emperors. Along the way, he chanced upon meeting other eagles who join him in his journey. However, just when he was about to land in the city, disaster struck and he had to do everything to keep himself from landing on his Emperor. With another adventure knocking on his door, he was engaged in the destruction of pirate ships that threatened his people. Romance was also at the corner—beautiful girls captured his heart and he found himself married. Just when he thought everything is going well, Cuauhtémoc finds himself confronted by another adventure, one that brings him to the throne.

Best Cheap Announces Availability of their Services to the Public

Best Cheap Announces Availability of their Services to the Public