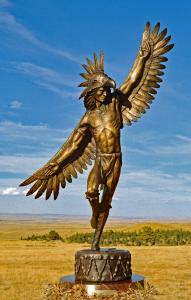 ‘’Spirit Of The Thunderbird’’ by Chris Navarro 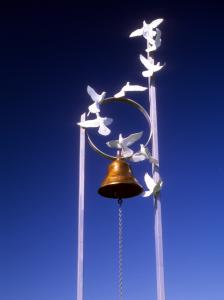 ‘’Ring Of Peace’’ by Chris Navarro 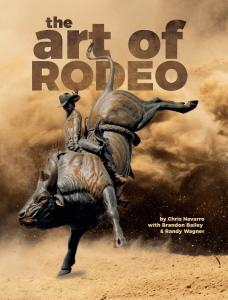 ‘’The Art Of Rodeo’’ by Chris Navarro

Your happiness should not depend on what’s going on in someone else’s head.

”Your happiness should not depend on what’s going on in someone else’s head.””
— Chris Navarro

CASPER, WYOMING, USA, July 13, 2021 /EINPresswire.com/ — I read the front-page article in the July 4th Casper Star-Tribune at https://trib.com edition. The article was about the controversy at Art 321, the exodus of board members, concerns about the standards of art under the new leadership and backlash over the Art of Pride exhibit. A show created to show support of the LGBTQ community.

I just had my Art of Rodeo art show at Art 321 and had been working with Tyler Cessor the executive director. He talked about the Art of Pride exhibit and asked if I had a problem with it being next to my rodeo art show. I told him I had no problem with that.

He asked if I would show my sculpture ‘’Ring of Peace,’’ the memorial sculpture I created for Matthew Shepard, in the Art of Pride exhibit. I told him I would.
The article stated there were flyers handed out, asking the public to boycott the gallery and said Cessor was “hiding behind the LGBTQ community to save his job.” I read that Joe Arnold, a former development chair, told the Tribune that he and Cessor butted heads over an exhibit from sculptor Chris Navarro. Cessor, Arnold said, was uncomfortable showing some of Navarro’s pieces that resembled indigenous art since Navarro is not indigenous. Arnold said he knew then his interests weren’t aligned with Cessor’s and gave up his position.

All I can say is wow! I did not know about all this controversy and drama going on there.

First, I had no problem with the Art of Pride exhibit. Heck why would I, my work was in it. Next the part, where Mr. Cessor was uncomfortable about showing Navarro’s pieces that resembled indigenous art since Navarro is not indigenous.

I also called Mr. Joe Arnold to get his take on the matter because I wanted to hear both sides of the story and find out why my name was being kicked around in the article. Talking with Joe, he was apologetic that I was drug into the story. I had worked with him and Art 321 to raffle off my sculpture Spirit of the Thunderbird to help raise funds for the organization.

I asked each why they assumed I was not an Indigenous American. Neither one gave a good answer but they both agreed they got into a heated argument over the matter. I told them I had a surprise for them because they were both wrong, and I had the DNA evidence to back me up!

For Christmas my wife Lynne gave me the gift of Ancestory.com. This gift came with instructions and in only 6 weeks I would know the mystery of my DNA ethnicity. Dang if my dreams of being a pure blood were completely shattered when I received the results. Come to find out I am of a mixed breed, nothing but a simple mongrel, merely a brown eyed American mutt. Here are the statistics of how it broke down: Spanish 33%, English 25%, Indigenous American 16%, Portuguese 8%, Wales 6%, French 3% and Irish 3%.

But wait! I found out I am 16% Indigenous American. However, was it enough? After all it was only 16%. Would I be able to make Indigenous American art without offending others in society? I thought about it for a while and then I decided who gives a ****!

Making art is not about who my parents are or my blood line. What it’s really about is my own mindset. Just as early man created images on cave walls, we all have an inherent need to express our individuality. One of the reasons I became an artist was to express who I am and what I believe.

But when you open the window of your soul and share your art with others, you expose yourself to criticism, judgment, and rejection. It is difficult not to take that criticism personally when you’ve invested so much of yourself in the creation.

We all suffer setbacks from time to time; it is the way we react to those setbacks that matters. That is why I like to take rejection and criticism and make them work for me.

When someone tells me that I’m not good enough or that my heritage isn’t quite right and I can’t do something, all it does is put a fire in me. It fuels my desire to not only disprove the naysayers, but also to prove that I am capable. Believe me, I don’t like rejection, failure, or looking foolish, but I’m not afraid to take risks. Life is full of challenges, and that is what gives meaning to life. There is little value in easy perfection. Don’t do it because it’s easy; do it because it’s hard.

There will always be negative people and haters out there. Your happiness should not depend on what’s going on in someone else’s head. You have no control over that. What matters is how you view yourself and what is going on inside of your own head.

It is important to keep your sense of humor in all things. Humor is the armor that protects you in life; it is the great lubricant that makes the difficult things easier to bear. So, laugh at yourself and roll with the punches.

For the artist who thrives on challenges and believes in themselves, rejection is not a problem. Because the real responsibility of an artist is to put forth their best effort and strive for continual improvement. In the end, that is all one can do.

Your time and energy are the greatest gifts you have been given. How you use them will determine how much you will grow in this lifetime. That’s the way it should be.