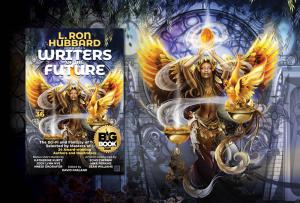 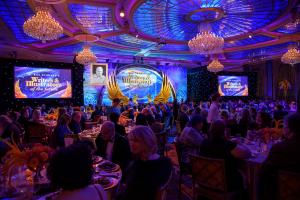 The Taglyan Cultural Complex Grand Ballroom where the L. Ron Hubbard Writers & Illustrators of the Future Achievement Awards ceremony was held for 2020 – 2021. 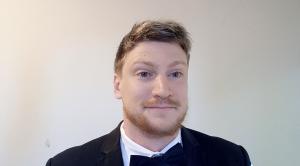 There is nothing like this competition. There’s nothing in this time where it’s getting increasingly harder to get a story or a novel published that celebrates new talent the way this Contest does.”
— C. Winspear, Golden Pen Award Winner

SIDNEY, NEW SOUTH WALES, AUSTRALIA, November 3, 2021 /EINPresswire.com/ — On the evening of Friday, October 22, 2021, Hollywood returned to its resplendent glamour and elegance with the 36th and 37th Annual L. Ron Hubbard Achievement Awards Gala for Writers and Illustrators of the Future Contests in the genres of Science Fiction and Fantasy held at the Taglyan Cultural Complex in Hollywood, CA.

Due to delays and postponements over the last year and a half due to the worldwide health pandemic, the awards show for 2020, and the awards show for 2021 were combined into one evening celebrating writer and illustrator winners from both years. Unfortunately, winners from outside U.S. borders could not attend due to travel restrictions, including two writer winners from Australia, Chris Winspear of Blacktown, NSW, and Michael Gardner of Amaroo, ACT. Australian author and Writers of the Future Judge Dr. Sean Williams, who contributed his essay “Art and Writing Tips” for Volume 36, was also unable to attend.

Four Grand Prize Winners were announced at the Awards Gala.

A prerecorded message from Winspear was played upon his announcement as the Grand Prize Writer Winner. “This is not just encouragement for me personally; this is, of course, encouragement for my fellow writers here in Australia and across the world…. There is nothing like this competition. There’s nothing in this time where it’s getting increasingly harder to get a story or a novel published that celebrates new talent the way this Contest does. So, thank you to Author Services and the big man L. Ron Hubbard for starting this award.”

A capacity crowd of 300 people attended the Black-Tie Gala. Presented by Author Services, Inc. and Galaxy Press, the theme for the two-and-half-hour awards show was a Fantastical Phoenix Voyage.

This year’s event, an Invitation Only function, can be viewed at www.writersofthefuture.com.

Coordinating Writer Contest Judge David Farland and Fellow Writer JudgeTim Powers announced writer Chris Winspear as the 2020 Golden Pen Award winner, letting him know during the online live broadcast that a check for $5,000 will be mailed to him in Australia, since he wasn’t able to attend the awards show in person. Winspear’s winning story, “The Trade,” was illustrated by Arthur Bowling.

David Farland and Tim Powers then announced writer Barbara Lund as the 2021 the Golden Pen Award winner while presenting her with a check for $5,000. Barbara Lund’s winning story, “Sixers,” was illustrated by Will Knight.

Echo Chernik and Brittany (Bea) Jackson then announced illustratorDan Watson as the 2021 Golden Brush Award winner letting him know during the online live broadcast that a check for $5,000 will be mailed to him in the UK, since he wasn’t able to attend the awards show in person. Dan Watson illustrated writer
Luke Wildman’s story, “How to Steal the Plot Armor.”

In her Keynote Address, Toni Weisskopf stated: “We, all of us here – the bright stars of the future together with your experienced judges and workshop coaches—we are a community. Science Fiction is famously ‘hard.’ It deals with hard science; it’s hard to write. Does this mean that Fantasy is easy? Some people will tell you that. Not me.

“I won’t tell you Fantasy is easy. As that famous comedian Alan Swann said, ‘Dying is easy! Comedy is hard!’ So is Fantasy if you want to do it right. It seems to me that if Science Fiction is about learning how to understand and control the universe, from nanotech level all the way up to gravity and deep time, maybe Fantasy is about coming to terms with not being able to control the universe. And that ain’t easy.

“They are complementary approaches to fiction, two sides of the same coin—and that may be why so many writers write both Science Fiction and Fantasy—L. Ron Hubbard among them.”

Weisskopf continued, “So – lift each other up. Share your experiences with newer writers and artists, just as the Writers of the Future has helped each of you. Keep the chain of pay it forward going. Include everyone in your futures. Keep the conversations going! And most importantly, be proud to tell your tales of brave knights and heroic courage, and show competent, good people solving problems. And if that’s not how you work— show the dark side of ‘if this goes on.’ Tell us where we don’t want to go. But mostly lift each other up, make our futures brighter, not darker. We’re going to need it.”

About The Contests:
Following the 1982 release of his internationally acclaimed bestselling Science Fiction novel, “Battlefield Earth,” written in celebration of 50 years as a professional writer, L. Ron Hubbard created the Writers of the Future Contest (www.writersofthefuture.com) in 1983 to provide a means for aspiring writers of speculative fiction to get that much-needed break. Due to the success of the Writing Contest, the companion Illustrators of the Future Contest was created in 1988.

The annual Contests draw entrants from around the globe and are free to enter. Winners retain full rights to their work and each are given cash awards. Grand Prize Winners receive an additional $5,000. The Contest flies out all winners to Los Angeles for an expense-paid, weeklong workshop given by Contest judges and culminates in a Black Tie Gala Awards event.

In the 37 years of the Writers of the Future Contest, there have been 428 winners and 80 published finalists. The 428 past winners of the Writing Contest have published 1,150 novels and nearly 4,500 short stories. They have produced 33 New York Times bestsellers and their works have sold over 60 million copies.

In the 32 years of the Illustrators of the Future Contest, there have been 358 winners. The 358 past winners of the Illustrating Contest have produced over 6,000 illustrations, 360 comic books, graced 624 books and albums with their art and visually contributed to 68 television shows and 40 major movies.

The Writers of the Future Award is the genre’s most prestigious award of its kind and has now become the largest, most successful and demonstrably most influential vehicle for budding creative talent in the world of speculative fiction. Since its inception, the Writers and Illustrators of the Future contests have produced 37 anthology volumes and awarded upwards of $1 million in cash prizes and royalties. For more information, please visit www.writersofthefuture.com and www.galaxypress.com

‘Slide into Wellness’ with Microbe Formulas and Boise Hawks Baseball

Royalty Mirror Transforms How People Shop for Glass & Mirrors in 2022

‘Slide into Wellness’ with Microbe Formulas and Boise Hawks Baseball

Royalty Mirror Transforms How People Shop for Glass & Mirrors in 2022