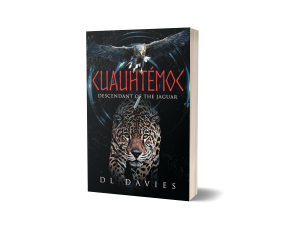 Cuauhtémoc: Descendant of the Jaguar

Book three of the series focuses on family history and destiny

TORONTO, ONTARIO, CANADA, April 29, 2022 /EINPresswire.com/ — In the third installment of the Cuauhtémoc series, “Cuauhtémoc: Descendant of the Jaguar,” author D L Davies offers another dose of adventure and fantasy. As the titular Cuauhtémoc or Descending Eagle in ancient language finds himself with a new set of powers, he finds out more about his family history and the undeniable fate that awaits him.

Born at the height of World War II, writer D L Davies and his family moved around the US several times before he found a new adventure of his own as army personnel stationed in Germany. He stayed in Europe in the ‘70s and eventually worked as a welder and a mechanic upon coming back to the States. Even during this time, he found himself conjuring up worlds that are different from his own and has generously decided to share them with others in the form of the Cuauhtémoc series. In his free time, he enjoys hiking and fishing as well as doing some photography.

Armed with a new power—the capacity to transform into a jaguar, Descending Eagle adds this to his roster of other amazing powers: a perfect memory, the ability to converse with animals, and a charismatic personality that lures others to him. Finding out about his grandfather and their illustrious family history, he finds himself faced with his destiny—to be the greatest Mayan to rule Maya with wisdom and love.

With a bit of everything: historical fiction, fantasy, and a generous serving of alternate realities where common cultural taboos are accepted, “Cuauhtémoc: Descendant of the Jaguar” gives readers a delightful look at a world so different from our own yet one that is captivating and engaging.