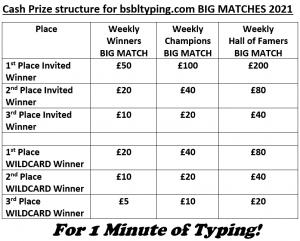 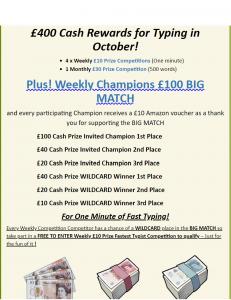 BLACKPOOL, LANCASHIRE, UNITED KINGDOM, November 6, 2021 /EINPresswire.com/ — There’s a stellar line up of elite typists from around the world taking part in the bsbltyping.com speed typing contest of the type that harks back to the early part of the last century. These include a Professor from China, a Dutch MA in Conflict, Security and Development, and a 16-year-old hot shot fast typist from the UK.

Big Match Competition Starts 14th November 2021 8pm GMT
Tony Rust, Managing Director of Better Skills, Better Life Ltd, the company behind bsbltyping.com, explains, ‘We’re aiming to revive the excitement that people felt about typing contests and typing championships that took place when typewriter companies were trying to out-do each by claiming ever higher speed records that could be achieved using their machines”.

“There’s an excellent new book, ‘Nerds Per Minute’, by Sean Wrona, a man often described as the Fastest Typist in the World, which in part recalls that age of innovation and the excitement that surrounded speed typing competitions. As Sean Wrona says, there are more people interested in fast typing than NASCAR. In fact, there are hundreds of millions of people across the world who use their fast-typing skills every day, gaming on PCs. We’re returning to that age of competitions, where fast typists are celebrated and rewarded with cash prizes for their extraordinary skill, their amazing hand-eye-brain co-ordination and their determination to be the fastest and the best.”

“Our bsbltyping.com speed typing competitions give those gamers, and ordinary typists, a chance to earn money from their typing skills by winning cash prizes. All our competitions are free to enter. We’re not just here for the fastest typists in the world, we want to give everyone a chance of winning something. That’s why our bsbltyping.com Weekly Champions £100 Big Match speed typing competition is two competitions in one. One group of competitors are the Invited Champions, the second group of competitors is made up of a limited number of wildcard entrants, these are competitors who took part in one of our Weekly Fastest Typist competitions but didn’t win.”

“The current bsbltyping.com world record for one minute of typing is 170 WPM with 100% accuracy. With the quality line up that we have of the world’s best and fastest typists competing against each other there’s a good chance that we might see that record broken.”

These are all skill-based competitions and in recognising that there are typists who have average skills and those who have varying levels of super-skills, bsbltyping.com have designed a league structure. This means that every one of the Fastest Typist Competitors will have a placing on a scoreboard, and those competitors who have a higher level of keyboard skills will achieve the rank of Winner, Champion or Famer and will compete within that level.

David Moore on How to Achieve High Employee Morale