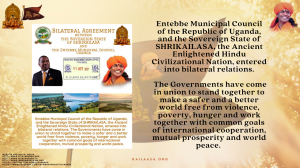 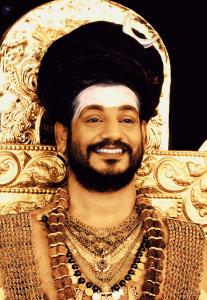 SHRIKAILASA entered into a vital agreement with the Entebbe Municipal Council of the Republic of Uganda for commencing a long-term friendship.

MONTCLAIR, CA, USA, November 24, 2021 /EINPresswire.com/ — A bilateral agreement was signed between the Sovereign State of SHRIKAILASA, the Ancient Enlightened Hindu Civilizational Nation, First Nation of Hindus and Entebbe Municipal Council of the Republic of Uganda in early October, during the auspicious Hindu Navaratri festival. The two governments evaluated the various aspects of the Agreement’s cooperation in favor of SHRIKAILASA’s and the Entebbe Municipal Council’s common goals of international cooperation, mutual prosperity, and world peace.

This historic, cross-cultural partnership is a pivotal step towards contributing towards matters of common interests between SHRIKAILASA and the Entebbe Municipal Council as a step to improve communities and promote peace in a moment in which humanity is experiencing numerous uncertainties and turmoil worldwide.

About Section
The Sovereign State of SHRIKAILASA’s, the Ancient Enlightened Hindu Civilizational Nation, First Nation of Hindus and having founding principles of ahimsa (non violence), advaita (oneness) and living in harmony with nature and fellow human beings presents a bold vision for the of human potential, peaceful co-existence, organic living and alignment with nature, echoing the ideal that once thrived in the enlightened civilizations of the East.

The Sovereign of the Sovereign State of SHRIKAILASA, the Supreme Pontiff of Hinduism (“SPH”), Jagatguru Mahasannidhanam (“JGM”), His Divine Holiness (“HDH”) Bhagavan Sri Nithyananda Paramashiva is the reviver of Hinduism and SHRIKAILASA, the Ancient Enlightened Hindu Civilizational Nation, the First Nation of Hindus. SHRIKAILASA led by the SPH has been working ardently using the science of enlightenment based in Hinduism to support humanity for global peace (Ahimsa), gender equality, fight against global warming, universal free access to holistic education and healthcare, veganism as per Hinduism, etc.

Ascento Capital Advises StreamWeaver, a Leading AIOps Company, in Its Sale to BMC

Ascento Capital Advises StreamWeaver, a Leading AIOps Company, in Its Sale to BMC