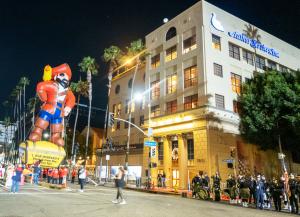 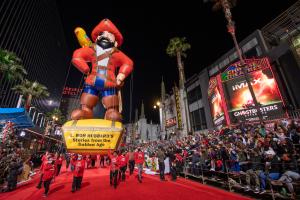 Captain Tom Bristol from L. Ron Hubbard’s Stories from the Golden Age on the red carpet in the 89th annual Hollywood Christmas Parade 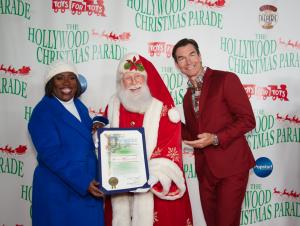 The L. Ron Hubbard Theatre celebrated its 10th anniversary as host to the Hollywood Christmas Parade.

We initially joined in the Hollywood Christmas Parade in 2008 with the release of our Stories from the Golden Age line of books written by L. Ron Hubbard. ”
— John Goodwin, President Galaxy Press

HOLLYWOOD, CA, UNITED STATES, December 2, 2021 /EINPresswire.com/ — The L. Ron Hubbard Theatre, located in Hollywood just a block west of the famed Chinese Theatre and historic Hollywood Roosevelt Hotel, is perhaps best known during the holiday season as the host to the Hollywood Christmas Parade. As the parade celebrated its 89th anniversary, the Theatre marked its tenth as the green room.

John Goodwin, President of Galaxy Press, stated, “We initially joined in the Hollywood Christmas Parade in 2008 with the release of our Stories from the Golden Age line of books written by L. Ron Hubbard. It was a few years later that Associated Television, the owners of the parade, asked us to host the green room due to our location on Hollywood Blvd coupled with extreme enthusiasm for the parade.”

The Hollywood Christmas Parade is an annual American parade on the Sunday after Thanksgiving. The L. Ron Hubbard Theatre provides the kick-off where parade celebrities enter the parade and travel the 3.5-mile route along Hollywood Boulevard, down Vine, then back along Sunset Boulevard.

Radio theatre has a rich and storied tradition. Developed in the 1920s and growing in popularity over the next several decades, it’s a form of dramatic entertainment that, in its heyday, brought family and friends together, as they gathered around the radio to share in thrilling adventures, raucous comedies, and compelling mysteries. Millions of listeners tuned in to listen to the broadcasts featuring the top actors of the time.

The L. Ron Hubbard Theatre, established in 1997, is dedicated to recreating that extraordinary experience for today’s audience—going back to the roots of authentic Hollywood entertainment. The Theatre showcases the fiction works of L. Ron Hubbard in a modern-day environment with Hollywood actors where the entire family can experience LA live theater up close and mingle with the actors afterward.

It also offers a variety of good stories being performed throughout the year, ranging from adventure, science fiction, and fantasy to mystery and western, and begins with a 30-minute live musical pre-show. All shows are appropriate for all ages. The Theatre went dark due to the pandemic and will remain so until social protocols allow us to offer live Theatre once again. Until then, we invite you to watch past productions by visiting www.galaxypress.com/theatre.

For photo highlights of the green room and parade, visit facebook.com/LRonHubbardTheatre. The parade will air on the CW on Friday, December 17th, at 8:00 pm PT. For more information on the parade, celebrity participants, etc., visit https://thehollywoodchristmasparade.org/.