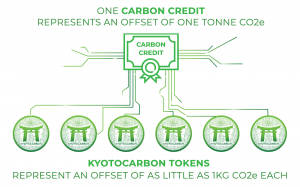 NFT Marketplace empowers anyone and everyone to take responsibility for the planet.

UNITED KINGDOM, November 26, 2021 /EINPresswire.com/ — Carbon offset is a global hot topic following COP26 – it could be the solution to our most pressing issue as a species, but most of us have never participated in it. This is something The Kyoto Network plans to change.

Carbon offset is the act of reducing carbon dioxide emissions to compensate for emissions made elsewhere. It is achieved through carbon credits, which fund environmental projects that reduce the amount of CO2e in the atmosphere. This offers the opportunity for our carbon footprints to be eradicated, potentially solving the issue of climate change. But if this is the long-coveted panacea to save the planet, why have so few been able to utilise it?

Since the introduction of carbon credits back in 1997, this unparalleled weapon in the fight against climate change has been inaccessible to most, until now. NFT marketplace, Digitorize, have officially launched The Kyoto Network – a revolutionary system in which participants can easily and affordably offset their carbon emissions and invest in the ever-expanding carbon credit markets.

One carbon credit represents the offset of one tonne of CO2e from the atmosphere. The Kyoto Network fractionalises or combines carbon credits to create KyotoCarbon tokens, each representing an offset of as little as 1kg of CO2e. These KyotoCarbon tokens will be available for purchase with KyotoCoin, which users can currently secure in a limited private sale. With KyotoCarbon users can offset a whole host of carbon emission culprits – from their personal air travel to an entire city’s electricity consumption, empowering anyone and everyone to take responsibility for the planet.

As agreed in the 2015 Paris Climate Agreement, nations are racing to keep global temperatures below 1.5°C above pre-industrial levels by the end of the century, however we are currently expected to reach the 1.5°C mark in the early 2030s. The effects of carbon emissions are becoming ever more apparent as sea levels continue to rise, habitat destruction results in wildlife extinction, and countries battle through increasingly extreme weather, droughts, and natural disasters.

The mission is no longer to speak for the earth, for the earth is now speaking for itself. Urgent action is required if we are to achieve carbon neutrality, and carbon credits are one of the few true contenders in available solutions.

Visit www.kyotocoin.io to learn more about the carbon offset revolution.

Growing at Alarming CAGR of 61.8% Revenue-based Financing Market Size is Expected to Reach $42.34 Billion by 2027

President Obama sings high praise for Taking it to the Streets

Christian Guide Book Shows How to be “A Dream Believer”

Growing at Alarming CAGR of 61.8% Revenue-based Financing Market Size is Expected to Reach $42.34 Billion by 2027

President Obama sings high praise for Taking it to the Streets

Christian Guide Book Shows How to be “A Dream Believer”