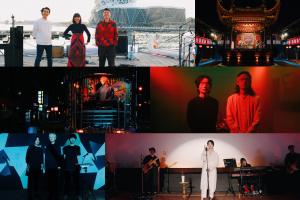 Taiwan Beats Showcase at SXSW Online 2022 introduced different aspects of Taiwan through the combination of artists and spectacular backdrops.

LOS ANGELES, CA, UNITED STATES, May 13, 2022 /EINPresswire.com/ — The highly praised “Taiwan Beats Showcase” featured in 2021’s SXSW Online has expanded to include six Taiwanese artists for this year’s rendition. The artists include Elephant Gym, Sorry Youth, Olivia Tsao, Mong Tong, Sleeping Brain, and DJ QuestionMark. Spotlighting each artist’s personality at six cultural venues, the live session is now available on YouTube, and the soundtrack of the showcase is available for a limited time on SoundCloud.

The showcase begins with Sorry Youth, an essential band of the Taiwanese Hokkien music scene in recent years, at the Wufeng Lin Family Garden. The Garden is often considered an important location for modern Taiwanese history, with the band bringing tracks “Pilgrimage” and “Love Our Difference” from their album “Bad Times, Good Times.” Sorry Youth states, “We felt as if we were on the set of Crouching Tiger, Hidden Dragon, performing live for director Ang Lee.”

Adding to the hypnotic visual and lyrical enthusiasm, DMC World DJ Championship Taiwanese winner DJ QuestionMark’s showcase performed on a carnival truck that evening. The trucks, a vital staple of Taiwanese religious and folk culture, were fitted with colorful neon tubes, giving his performance a flare of cyberpunk visuals, even surprising and gaining praise from SXSW’s music director James Minor. To add to the originality, Golden Melody winner Olivia Tsao filmed her set at Chuan Mei Theater in her hometown of Tainan. The theater is famous for being one of, if not the last, establishment to use hand-painted posters to promote their current showings; it has also become one of the locations the annual LUCfest uses as a performance venue.

The second half of the “Taiwan Beats Showcase” took the audience into the life of modern Taiwan, with the psychedelic folk electronic duo Mong Tong performing in the mysterious Taipei underground club Pawnshop. Their two tracks, “A Nambra” and “Minyo Pop,” served as the soundtrack with which audiences were allowed to peek into the club, followed by the Indie electronic band Sleeping Brain. They chose to film their showcase in the experimental venue WET BASE, located in the Tiaotong business district, collaborating with VJ Ludol777, transforming the space into a playground with visually stunning lighting installations.

Finally, bringing tracks from their new album “Dreams,” which was released in May, Elephant Gym’s showcase was a combination of footage from their performance at Megaport, which happens to be the largest festival in their hometown Kaohsiung.

Enhancing the senses of sight and hearing, the showcase engulfed fans with an array of emotions, bringing Taiwan traditions and culture to the forefront. The showcase pairs visuals and sound with an enhanced futuristic edge. With so much innovation and creativity immersed in the showcase, it’s no wonder the world is eager to embrace the multimedia innovations and musical talents of “Taiwan Beats Showcase.”

About Taiwan Beats Showcase
Participating in a global industry event such as SXSW, “Taiwan Beats Showcase,” showed international audiences the essential and unique locations of the Taiwanese cultural landscape. Before airing, it caught the attention of some of the most prominent publications in music, such as NME, Mixmag, and Bandwagon. The audio tracks of the showcase are currently available as a digital album for a limited time on SoundCloud, with the full showcase accessible through YouTube.