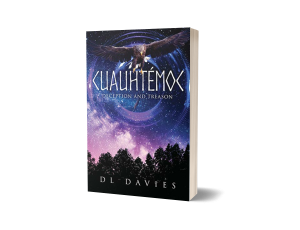 TORONTO, ONTARIO, CANADA, April 29, 2022 /EINPresswire.com/ — “Cuauhtémoc: Deception and Treason” is the final installment of the incredible four-part Cuauhtémoc series from author D L Davies. In this book, the titular Cuauhtémoc is riddled with the responsibilities of being the Mayan emperor and learns more on how to use his range of superpowers for the benefit of his people.

Born in California in the middle of the Second World War, author D L Davies has moved around the United States several times in his youth. Among the places where he and his family have lived are Oregon (where he spent most of his time as a teen), Arizona, Montana, Idaho, Florida, and Nevada. He joined the army in the seventies and was stationed in Europe, specifically in Germany, and stayed there for a couple of years. Since his younger years, he has always crafted different realities in his head and now put them into writing. He enjoys the outdoors and being close to nature. He also finds photography fascinating.

In the last book of the series, the author sews up loose ends into an enticing climax with Cuauhtémoc leading the Mayan empire into becoming a global superpower with undeniable influence in Western countries like England and Spain. With his ability to converse with Christian and pagan gods as well as learn people’s intentions by reading their auras, Descending Eagle positions his people into becoming an indestructible force. As he matures and settles into becoming a benevolent leader, Cuauhtemoc proves the incredible impact of making one’s own path in changing the world for the better.

Wonderfully written, this series ender proves to be a page-turner that keeps fans of fantasy, history, adventure hooked.

About Bookside Press: Bringing stories and ideas to life, one tap at a time.

The New Normal: ‘The Business Ecosystem in the Middle East and Europe’