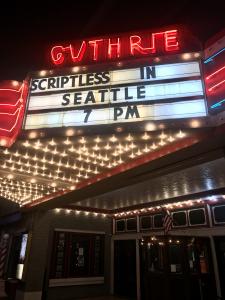 Scriptless in Seattle Improv Comedy partners with Paul in One magic to bring show to the Mercury Theater Depot, marking first their major show of 2021.

Each showing is only allowing 65 audience members and tickets are required. Reserve tickets online for just $10 here or at bit.ly/SISTickets to experience it firsthand.

“When I was first approached about blending improv comedy and magic, I was intrigued,” said Paul Gunsalus, the man behind Paul in One Magic. “I had dabbled a bit in the improv realm and still use a lot of the same skills in my magic career. I’m excited to see what this show brings! I think people will have a unique experience stating with the wonder of live magic and then settle in for a night of laughter.”

Scriptless in Seattle’s improv comedy has performed in a variety of venues in both Ohio and Pennsylvania, including churches, coffee houses, and large historic stages. However, like every other performance group in the nation, staging shows for live audiences has been challenging over the last year. In fact, this show marks the first large theater show of 2021.

“It’s been a real challenge to book anything,” said group manager Justin Folger. “Of course, we want to keep everyone safe, but we also want to get back to bringing laughter and joy to audiences. We did put on a small coffee shop show in PA, a small fundraiser at a church, and have another coffee shop show booked this month, but nothing like this all year. Our whole group is ecstatic to get back to doing what we love!”

For Gunsalus, this show also marks the first full length gig since the pandemic began. “Being able to interact with people again in person is something I really value, and when everything went virtual we all had to rethink things… including magic,” said Gunsalus. “I had to divide my act between what can and can’t be done on camera. Now, after much delay, I’m excited to break out a few tricks I’ve been waiting to debut and really interact with an audience again.”

Ticket reservation is first come, first serve and available at the link listed above. The event is sponsored by platinum sponsors: Trombka Dental Ravenna and BrewDog Dog Tap, as well as others.

Industrial Packaging Market Worth $69,787 Million by 2023 | by Product, Material & Application