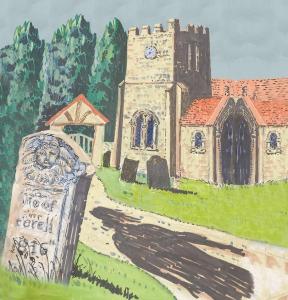 SAN JOSE, CALIFORNIA, UNITED STATES, May 7, 2022 /EINPresswire.com/ — Samson’s Shadow is a novel written as a church warden and vicar of a parish north of London struggle with the suicide of their bishop. As mutual trust between them grows, surprising discoveries emerge as they explore life experiences leading to the present situation. Speaking in the mutual confidence of confession allows revelations of truth from those encounters which carry hidden treasures that impact self-image and adult relationships. The novel was written by the Reverend Ernest William Cockrell in response to his own bishop’s suicide.

Born during a hurricane on the Gulf Coast of Texas, the author was raised during World War II in rural, pre-electrification Eagletown in southeast Oklahoma before his family moved to the county seat of Idabel, where he completed high school during strict racial segregation.

The author graduated from Oklahoma City University before completing graduate studies at Harvard Divinity School in 1963, followed by a year of Anglican Studies at the Episcopal Divinity School across Harvard Square in Cambridge, Massachusetts. He served as curate for three years at Church of the Redeemer in Chestnut Hill, Massachusetts where he was ordained an Episcopal priest. For 25 years he served as rector of Saint Gabriel’s Episcopal Church in Marion, Massachusetts, a beautiful seaside community overlooking Cape Cod. In 1992 he was called to be rector of Saint Andrew’s Episcopal Church and School in Saratoga, California, where he retired in 2007. He and his wife, Jill, raised two children who gave them three grandchildren.

Flying to Boston to attend the Requiem Mass for his former bishop, he kept wondering: “What were his shadows” that resulted in death? That question motivated him to envision the scenario which became Samson’s Shadow, setting the novel in a parish church in the kind of English village where he had served as summer vicar in 1969. In that context the church warden and vicar took life. He served as their scribe as they wrote the book, recording their conversations, using one aspect of the search for manhood that had eluded the church warden, “who had everything:” wealth, heritage, loving family, community respect – except for the one thing that he believes would secure his manhood, clearly visible in his valet, a friend from earliest years. Revelations evolved from the times the church warden and vicar spent together “every Wednesday at 3:00,” sometimes humorous, sometimes with some force and anger, stressful for the vicar dealing with his boss, concerned that facts might emerge that could damage – even end – their relationship.

Discussed within the seal of confession, chapters are replaced by “sessions” from the vicar’s “verbatims:” notes kept under lock and key, sent – upon retirement – to the church warden for his disposition, as the editor’s note explains at the introduction to the novel, as befits the confidentiality of confession. Deep insights emerged through memories of puberty, experimentation, family and community relationships, fathers, and exploration of events, as well as questions of self-image.

Trust builds between the two men, leading them to an unexpected depth of friendship and appreciation. After a small breakthrough the church warden invites the vicar to accompany him on a post-Easter trip to Scotland to investigate a forest fire on his family property. Camping together brings fresh vulnerability for both men resulting in discoveries involving moments of exposure, anxiety, humor and joy.

Women readers of Samson’s Shadow have confessed that the novel reflects the different stages of their own journeys to womanhood, involving similar moments of intense emotion, doubts, confusion, and resulting scars, as well as discovery.

Samson’s Shadow speaks clearly about important conversations that hardly ever take place between parent and child as being too personal. As a priest writing such a novel, the author asked only if the novel is real and true. Certainly it has the courage to express honestly and unflinchingly the doubts, pain, and fears boys face on their journey to manhood.

The novel was published electronically on March 30th 2022 and is now available on Apple Books, Kindle, or wherever you find your eBooks.

How to Clear the Hazy — What Exactly Is Brain Fog