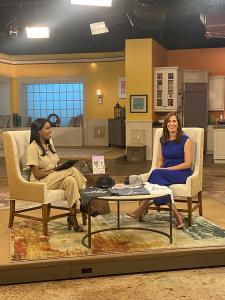 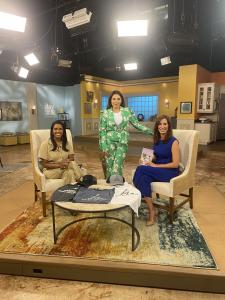 Robin is America’s resiliency voice on NBC-based WFLA-Tampa Bay’s Daytime TV show in her first appearance as a guest mental performance and resiliency expert. This week’s show airs on Friday, May 13th, at 10 a.m or 11 a.m, depending on your station.

Daytime is syndicated to more than 130 U.S. markets, reaching 191 television stations in more than 140 cities and DISH TV. They run an audience of more than 80 million households monthly.

Gargano began her appearance on Daytime in 2022 as America’s first resiliency whisperer-only TV expert. The network is looking forward to receiving a great response from viewers so that they can have her on as a regular monthly guest.

Gargano’s L4 MAP strategy started more than five years ago when she saw the need to bridge the gap between coaches and athletes and give athletes a seat at the table. She founded L4, Livin’ Life Lovin’ Life, in 2018 by first creating an apparel line that started a movement in mental health and sports. There is a demand in the sports industry for cognitive performance experts that help these athletes with mental toughness. Working closely with her global PR team headquartered in NYC, Robin’s popularity in the mental performance space and resiliency caught the attention of local media producers, and they offered her a segment on Daytime.

She shares a new strategy for her episode during mental health awareness month. She talks with show host Farron Hipp about her experiences and tips on the role of coaches in improving their athletes by flexing into particular and individual communication styles, looking inward, and discovering the facets of how the mind works to enable growth towards excellence.

About Robin Gargano:
Robin is a best-selling author of her successful “The Beauty Within Tragedy” self-development book and a syndicated TV resiliency whisperer, a podcast host of Candy for Breakfast with her co-host and husband Cliff. After losing cognitive function and going through mental toughness and depression, Robin decided to turn her grief into power. As an expert, coach, and strategist, she works with corporations and one-on-one coaching and is looking forward to working with major league athletic teams. Robin is represented by a global PR agency, ZavoMediaPR Group, turning her brand into a sensation.