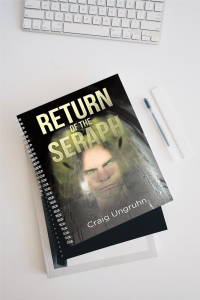 The new planet is remarkably identical to the now uninhabitable Earth; even the wildlife is indistinguishable. Eventually, the humans clash with the native inhabitants of the planet.”
— Craig Ungruhn

FRANKFURT, HESSE, GERMANY, December 6, 2021 /EINPresswire.com/ — FCraig Ungruhn’s Return of the Seraph is a science fiction novel that chronicles the adventures of Zack Branford as he is recruited in capturing an escaped alien lifeform. Published by Page Publishing, the novel takes place hundreds of years into the future as Earth becomes uninhabitable.

Earth succumbs to an ecological armageddon brought about by man’s greed. The surviving populace embarks on a planetary exodus till eventually, after a perilous journey, reaching a planet capable of sustaining life similar to those of Earth which they called Haven. The new planet is remarkably identical to the now uninhabitable Earth; even the wildlife is indistinguishable.

Eventually, the humans clash with the native inhabitants of the planet. The author writes, “And so the humans secretly began building homes and living off the lant on the planet. They began creating weapons to use against the seraph. When the seraph eventually found out about this, they were furious. They began attacking the human settlements to try to force them off the planet. The humans began fighting back with the weapons that they had developed, and a decades-long war broke out between the two races. The seraph were physically and intellectually superior to humans, but the humans far outnumbered the seraph, who only had a few thousand inhabitants. The war was brutal, and millions of humans were killed in the fighting, but the humans were able to hunt the seraph down and destroy their settlements.” Thus starts the extraterrestrial enterprise of the
main protagonist, Zack Branford.

Craig Ungruhn is a graduate of Wright State University. Purchase your copy of his novel at Amazon and Barnes & Noble.
Return of the Seraph
Written by Craig Ungruhn
Paperback |
Kindle |

Authors Press is an online publishing company and book reseller catering to the needs of both experienced and aspiring authors as well as readers. They offer the best publishing solutions for full-time and independent authors. The company’s team of proofreaders, editors, designers, and publishing professionals are committed to achieve industry standards for their client’s work to be published, marketed, and sold.