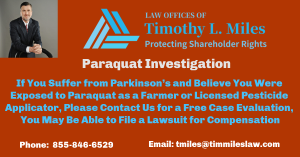 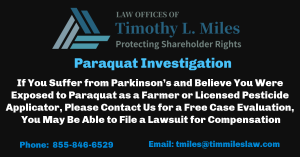 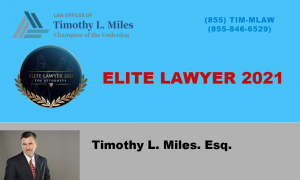 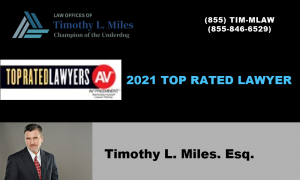 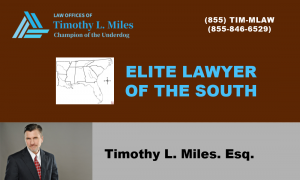 Link Between Paraquat and Parkinson’s

I urge anyone with Parkinson’s who believes they may have been exposed to Paraquat to contact our office immediately”
— Timothy L. Miles

If you or a loved one suffer from Parkinson’s and believe you were exposed to Paraquat as a farmer, living on or near farms or as a licensed pesticide applicator click here to participate immediately,

Plaintiffs Allege a Link Between Paraquat and Parkinson’s Disease

According to the complaint, Paraquat is a chemical herbicide or weed killer, that’s highly toxic and used all over the world. Research shows that paraquat exposure is dangerous, even at low levels that’s why many countries started to stop the use of it. Studies show that there is a link between Paraquat and Parkinson’s disease. Paraquat creates oxidative stress that kills dopamine-producing neurons. According to the complaint., “Paraquat is one of only a handful of toxins that scientists use to produce animal models of Parkinson’s disease.”

Scientists have long known that paraquat, often referred to as Gramoxone, is acutely toxic. Paraquat is so toxic, in fact, that a single sip of the herbicide can kill an adult. But in recent years, evidence has accumulated showing that repeated exposure to paraquat in low doses may be linked to the development of Parkinson’s disease. According to one study, exposure to paraquat increases the risk of Parkinson’s by 150 percent.

More than 60 countries have banned the use of paraquat. However, the U.S. Environmental Protection Agency (EPA) has done little to restrict its use, despite growing health concerns and legal challenges over the herbicide’s connection to Parkinson’s. Syngenta, the main producer of paraquat, denies that there is a definitive link between paraquat and Parkinson’s. The herbicide paraquat has been used on crops in the United States since the 1960s
The complaint further alleges: “Syngenta has long misrepresented and denied the harmful side effects of its Paraquat-based product.” Plaintiff Adams’ husband was a certified paraquat applicator. Both of them routinely sprayed paraquat products. She developed Parkinson’s disease after more than 15 years of paraquat exposure by pesticide drift, direct exposure and drinking water contamination.
Who Is at Risk of Developing Parkinson’s from Paraquat Exposure?

Farmers and agricultural workers who work directly with and around paraquat are at the greatest risk of being exposed to paraquat, and those living near farms using paraquat are also at risk. Exposure risks are not limited to people involved in agriculture, though. Evidence also suggests that paraquat can drift from the application site to nearby communities. Thus, people living in agricultural areas may be exposed to paraquat that is applied to crops. Paraquat may contaminate ground or well water and even contaminate fruits, vegetables, nuts, and grains that are sold to the public.

The Law Offices of Timothy L. Miles Urges Individuals Exposed to Paraquat and Developed Parkinson’s to Contact the Firm

If you suffer from Parkinson’s and believe you were exposed to Paraquat as a farmer or living on or near farms using paraquat licensed pesticide applicator, or grew up or worked on a farm or lived in close proximity to farms, contact Timothy L. Miles, Esquire, at (855) TIM-MLAW (855-846-6529), or by email to tmiles@timmileslaw.com or click here to participate. If you inquire by email please include your mailing address, telephone number, and email.

Isostatic Pressing Market Size is Expected to Reach $7.97 Billion by 2027

Isostatic Pressing Market Size is Expected to Reach $7.97 Billion by 2027