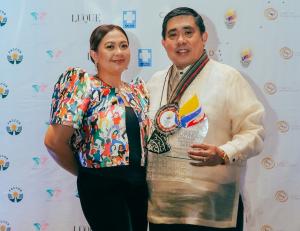 Johnny receives and dedicates award to his wife, Veronica Yu.

Johnny was given the award at the ceremony for his active civic and corporate efforts that helped to maintain both social and political stability in the country. During his address, Johnny expressed his thanks to the organizers and contributors, adding that he was elated with the award and dedicated it to his supportive wife, Veronica Yu, and fellow Rotarians.

Johnny is a benevolent man who lives for others. He’s a seasoned and successful business entrepreneur as well as an active civic leader. He earned his Master’s Degree in Public Management at the Unibersidad de Manila and was granted a PhD by Piedmont College, USA.

Johnny remarked, “I owe a lot to my parents for instilling in me the proper ethics and methods on how to operate a business, as well as my alma maters. Johnny’s business acumen was apparent even while he was in school. “When I was in college, I attempted to sell my friends and classmates Philippine-made signature apparel,” he recalls. As a result, he decided to distribute those shirts in locations such as Laguna, Quezon, Batangas, Bulacan, and Baguio before becoming the main distributor.”

Johnny’s service mentality is complemented by his desire to help others. Johnny was born with a strong motivation to serve, having witnessed his father give money to those in need as a youngster.

Johnny’s life appears to be leading towards humanitarian activities, such as firefighting and rescue work. He successfully put out the fire in his home before it spread, sustaining second-degree burns in the process. Johnny has already volunteered on four previous occasions, and he was only 17 years old when he decided that his experience was insufficient. He then travelled to Australia to study Disaster Management at Cranfield University, where he also studied as a member of the International Urban Search and Rescue Specialist for the Singapore Civil Defense Force.

When he was in college, Johnny joined the Rotary Club. He subsequently served as President of RAC PSBA and received the highest club award within his term. In 2005, he was invited to join the Rotary Club of Cubao, Quezon City, which paved the road for him to take office again in 2007 and again in 2012. Johnny made possible three Rotary International Grants for a Deep Well and Potable Drinking Station Project in Barangay Matagbac, Pililia Province of Rizal. He also served as the Director of the City of Manila’s Disaster Risk Reduction and Management Office; Chairman of the TEAM Network Fire & Rescue Volunteer Department; Chairman Emeritus of Civil Defense Action Group approved by the National Disaster Risk Reduction and Management Council and Office Of Civil Defense, Rotary District 3780 Committee Chair for Disaster Response And Relief.

“I am extremely grateful for the opportunity to serve others,” he adds. “Each job I take on and service I provide gives me a great sense of fulfilment! Most importantly, even if my schedule is busy or the tasks are monotonous, tedious, dangerous, or strenuous, I feel like I’m making a difference.”

Johnny has both the drive and expertise to run a business. He donated a 4-story building to the club in 2017, which is now known as the Rotary Club of Cubao Center for Excellence in Quezon City. This facility was created so that the youth of the club could have a long-term vocational service and leadership development program. It’s also a training center for emergency management and similar activities. He has access to cars and equipment that are actively utilized by volunteers in times of crisis. Johnny is the Founder of the Philippine Rotary in Emergency Preparedness and Response (PREPR) Foundation.

Johnny is the first Arch Klump Society member in Rotary District 3780 to contribute a total of $250,000.00 to the Rotary Foundation, thus winning a more illustrious award not only for himself but also for his district.

AI in Telecommunication Market Size Projected to to Reach USD 5.29 Billion By 2028

AI in Telecommunication Market Size Projected to to Reach USD 5.29 Billion By 2028