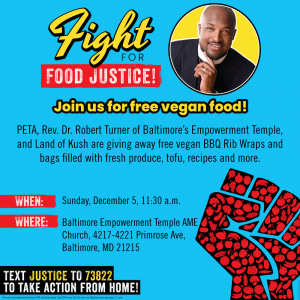 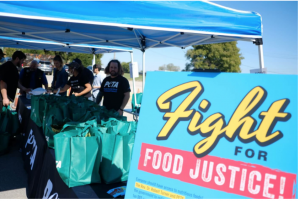 The Land of Kush Logo

We are excited to team up with PETA and Rev. Dr. Turner for this food justice initiative that sends an important message to our government.”
— The Land of Kush

BALTIMORE, MARYLAND, UNITED STATES, December 2, 2021 /EINPresswire.com/ — It’s a great new twist on the after-church fellowship meal: After leading the Sunday service at Empowerment Temple AME, the Rev. Dr. Robert Turner will join PETA and The Land of Kush in dishing out free vegan barbecue rib wraps as well as handing out free bags of groceries to members of the community as part of PETA’s food justice campaign. The group’s vegan meal starter kits of protein-packed and versatile tofu, fresh fruits and vegetables, recipes, and more are designed with nutrition in mind. PETA will also invite people to call on their representatives to redirect meat, egg, and dairy industry subsidies as incentives for grocers in “food deserts” to stock healthy, humane vegan foods. The Rev. Turner was with PETA last month to hand out free food to those gathering to pray for justice at the trial of Ahmaud Arbery’s killers in Georgia.

The Land of Kush owners, Gregory Brown and Naijha Wright-Brown expressed, “We are excited to team up with PETA and Rev. Dr. Turner for this food justice initiative that sends an important message to our government. More can be done to increase access to healthy foods and beverages in our communities. Let’s open the dialogue on pivoting to a more plant-based culture.”

Maryland’s government spends millions of tax dollars each year subsidizing the bloated meat, egg, and dairy industries. In 2020, the state gave $10 million to chicken factory farmers, when that money could have gone toward making healthy foods available in underserved areas where people have no ready access to fresh vegetables and fruits and other good foods. About one in four people in Baltimore live in an underserved community, and nearly one-third of the city’s residents don’t have access to a car, making local access to fresh foods essential.

“The government is propping up Big Meat while families in food deserts struggle to gain access to fresh fruits and vegetables, and that needs to change,” says PETA Executive Vice President Tracy Reiman. “PETA’s food justice campaign aims to call attention to the inequities and unhealthy choices people in ‘food deserts’ face.”

Stocking stores in food deserts with healthy vegan food would save animals’ lives; help vulnerable communities reduce their rates of cancer, heart disease, and diabetes; and help protect the environment, given that animal agriculture is responsible for nearly one-fifth of human-induced greenhouse-gas emissions and is a leading cause of habitat destruction, species extinction, and ocean dead zones.

Naijha Wright-Brown
The Land of Kush
+1 443-343-2834
email us here
Visit us on social media:
Facebook
Twitter
LinkedIn
Other

Outstanding Achievement Award for Sophocles at BCIFF in Paris, France

Outstanding Achievement Award for Sophocles at BCIFF in Paris, France