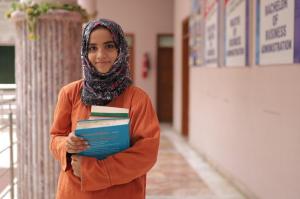 Noor Sahar Khan, a graduate of TCF’s Zuleika Bai Mukaty Campus in Karachi, has been accepted to Erciyes University in Turkey on a full scholarship. 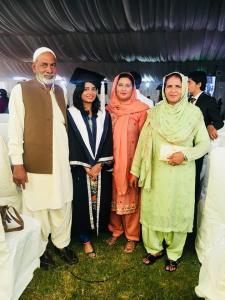 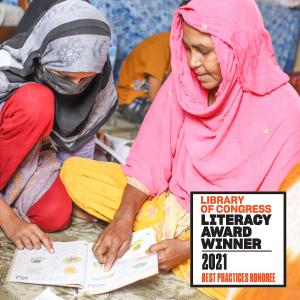 TCF’s Aagahi Adult Literacy Program has taught 150,000 women how to read and write

HOUSTON, TEXAS, UNITED STATES, December 8, 2021 /EINPresswire.com/ — For more than 20 years, supporters of a US-based non-profit The Citizens Foundation, USA (TCF-USA), mostly from the Pakistani diaspora, have given back to improve the lives of thousands of underprivileged children through quality education in their home country. The contributions have provided funding and operational support for 390 elementary and secondary schools offering K-10 education in urban slums and underserved rural areas.

These numbers are a big chunk of the schools run by The Citizens Foundation (TCF), the largest education non-profit with a network of 1,687 schools all across Pakistan. The professionally managed system includes 356 government schools adopted by TCF to demonstrate that efficient management, good pedagogical training, and numerous other quality inputs can turn things around in the dismal state-run school system. Total TCF enrollment this year is 275,000 students — and half the students are girls.

An assurance, too, is that donors and corporate social responsibility programs contribute half the TCF donation revenues raised in Pakistan. The balance is raised collectively by overseas TCF affiliates mainly comprising the diaspora in Canada, the UK, US, UAE, and the Middle East, and some atypical countries Norway, Italy, Australia, and Switzerland. About a third of the annual TCF budget is funded by TCF-USA, the largest overseas affiliate which reaches out to major donors and potential grantors through combined team efforts of employees and volunteers. Supporters satisfied with the progress and impact of the programs along with compliance, accountability, and transparency of the organization in the US give cumulative millions every year through campaigns and events as diverse as gala dinners, online drives, film socials, house parties, kite-flying festivals, and family picnics. The events bring regional communities together to socialize, receive details of program impacts, and be inspired by the success stories of the children, the cadre of teachers, the management, and the organization’s progress as a whole.

For workers in the corporate world, the larger US companies encourage charitable giving by matching the employee’s contribution which is a huge incentive for the donor. In addition to smaller year-round campaigns, two major annual campaigns are the year-end campaign and the zakat campaign which obligates Muslims to share their wealth through charitable contributions. The focus of the campaigns is to promote awareness that education of underprivileged children helps to break the cycle of poverty and improve their life chances for gainful employment and prosperity, with special emphasis on the empowerment of girls through quality education.

In a country of 220 million and many living close to poverty, nearly 70% of Pakistani families send their kids to free public schools which are known to severely lag behind in learning outcomes because of poor pedagogy and other ills that haunt the system, such as many government schools not having electricity, running water, or functioning toilets.
Since 1995, the TCF mission has been large-scale social change through education of the poor with gender equality for girls. To boost enrollment and retention of girls in schools (and to reassure parents regarding the safety of girls), all 13,000 TCF teachers and principals are women. This has been a resounding success highlighted in a case study by the UN Girls Education Initiative for best practices in girls’ enrollment.

For women and young girls who missed out on going to school entirely or dropped out to work or raise a family, a community-based adult literacy program Aagahi (literally ‘awareness’ in Urdu) offers basic literacy and numeracy and life-skills training. 150,000 women learners have completed the Aagahi program and it is noteworthy that TCF was recently recognized as an Honoree by the Library of Congress Literacy Awards for its contribution to increasing literacy in Pakistan.

With a 26-year history of the managed network of formal schools, TCF leaders and supporters are beginning to see the fruit of their efforts. Former TCF students from the slums and rural areas are going on to university, becoming teachers, engineers, physicians, allied health professionals, and joining the civil service. What’s more, TCF alumni lately are being accepted on full scholarship into university programs abroad: one young woman, Noor Sahar Khan, will be pursuing her theology bachelor’s degree in Turkey; a young man, Iqran Rasheed, is in a program funded by the EU in Portugal and Belgium for a master’s in cinematography; another young man, Zafar Ali, is at Syracuse University for a master’s in political science leading to a Ph.D.; and another young man Asad Sajid has been accepted to the Fulbright scholarship program and is waiting to hear from a US university. The most recent newsworthy story is of Sidra Saleem, a female medical school graduate and TCF alumna, currently at a neurology residency program in Ohio. And there are several other TCF alumni in various stages of application and admission requirements for programs abroad.

As education takes root and gender parity is achieved, girls are confidently joining the competitive workforce and making inroads into jobs traditionally not done by women, such as in the police force and defense services.

TCF is the largest private employer of women in the country. In addition to the 13,000 teachers and school principals, TCF employs many women who work in departments involving strategic planning, academics, quality assurance, monitoring and evaluation of teachers, curriculum development, marketing, and school management.

The TCF-USA staff work tirelessly to support the programs in Pakistan by coordinating marketing and fundraising in the major metropolitan chapters in Seattle, Washington DC, Houston, Chicago, San Francisco / Silicon Valley, New York, Boston, and about 30 other regions. TCF-USA is a tax-exempt nonprofit which makes it attractive for supporters to take advantage of tax-deductible contributions.

As a fitting testimonial, Senator Chris Van Hollen described TCF as doing “… outstanding work” [and] “Your schools are the foundation upon which the future of Pakistan depends,” he added. “They encourage character development and help students acquire the self-confidence to achieve their goals and create opportunities for a better and more vibrant future.”

Modular UPS Market Size Is Likely To Reach Valuation of USD 4.43 Billion by 2026 – Reports and Data

Modular UPS Market Size Is Likely To Reach Valuation of USD 4.43 Billion by 2026 – Reports and Data