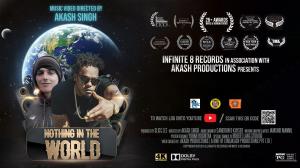 The 7th Edition of IFFS is being held in November from 26 to 28 in Shimla, India

SHIMLA, INDIA, November 20, 2021 /EINPresswire.com/ — Critically acclaimed and renowned Filmmaker of Ranchi, Jharkhand; Akash Singh, the winner of more than 50 awards and nominations globally, has Directed & Co-Created a music video ( lyrical ) “Nothing in the World” starring rising American singer and rapper Slicc Lee and featuring famous Hollywood Rapper Chubby JAG. The video was uploaded last year in 2020 on the official youtube channel of Cineakash Productions ( a production company owned by Akash Singh ) and in coming months it will officially release across all social media platforms and on some OTT platforms as well, following the trailer. This project is produced by Slicc Lee and the song is recorded at very popular Hollywood Recording Studio ROBERT LANG STUDIOS. This music video is dedicated to all those talented artists who are struggling hard in the industry because of inadequate resources and support, yet succeeding with their hard work. The screening of this music video will be held between 26 to 28 November at the 7th International Film Festival of Shimla, IFFS 2021 at Gaiety Theatre, The Mall. IFFS 2021 is one of the very reputed and famous Film Festival of India attended by many Bollywood celebrities every year and screening very few handpicked projects among thousands of entries every year.

Though the number of obstacles and aim of fulfilling dreams is increasing with every day, listening to music videos that spread a positive word of life can morally boost your mental strength, thereby allowing you to achieve whatever you have planned in life.

Slicc Lee is a Houston Texas based rapper who aims at raising his voice against the government officials who are becoming corrupted and self-centered that giving rise to problems like inequalities and social injustices. The video featuring Slicc Lee has already crossed 6 million streams on SoundCloud. The artist recently issued a statement that says, “Working with the well known artist Jag (Chubby Jag) has opened my eyes to a lot, and I feel blessed to be able to use my music to spread a message.“ – Slicc Lee

Jag delivers socially charged rhymes that are created for the purpose of touching listeners‘ hearts upon real-life issues and tales of hardened street life similar to fellow Los Angeles YG and Nipsey Hussle.

Akash Singh is a very young, passionate, multi-talented, and internationally acclaimed filmmaker, actor, and entrepreneur who hails from Ranchi, Jharkhand. While working with globally recognized organizations including Paradox, Warner Bros., CBS, Virgin Hotels, New York University, etc, Akash Singh has developed all the required skills, mindset, and passion that allow him to bring out the best from every project.