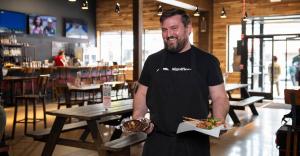 Chef Aaron showcases some of the new menu’s highlights

Building the cooking vessel from scratch was an important part of this creative process. It’s like a blacksmith—the first thing is to forge your own tools. And then you go from there.”
— Chef Aaron Busch

And starting this week—a brand new smokehouse barbeque menu from a world-class chef!

Travelers to Pittsburgh’s Strip District may have noticed work being done to both the indoor and outdoor spaces at the 1700 Penn Avenue location. And those with a nose for smokehouse barbeque may have noticed change was in the air as the kitchen staff tested the new restaurant menu on the custom-built smoker.

“At our 1700 Penn location, there is a lot of things we have always done extremely well,” said owner Christian Simmons. “Our collaboration with Helltown gives us access to a top local brewery. And our craft wine and spirits assortments are the most impressive in the state. Now—with our new menu—we’re offering customers a brand new restaurant concept with world-class appeal.”

The 1700 Penn Ave location—which features the Helltown Taphouse, Pennsylvania Libations’ Wine Shop and the most extensive collection of Pennsylvania-made craft spirits in the world—has become a top destination for craft drinks enthusiasts following its launch in Fall 2020. The next step in the space’s evolution includes a brand new smokehouse menu inspired in part by Chef Aaron Busch’s experience working in markets that include North Carolina and Miami.

Chef Busch said his aim was to create well-done, casual food. This will allow the restaurant to offer both top-notch brunch options, fine dining and global cuisine alongside craft beverages from across the region. For those into the art of gastronomy, the pairing of local wines, craft beers and the largest selection of Pennsylvania-made distilled spirits and liqueurs is a win-win proposition.

“Cooking with wood is a very primal thing,” Chef Busch said. “There’s a place in everyone’s heart that can relate to the nostalgia of it. It’s about more than just cooked meat with barbeque sauce. This is an act of love that manifests through time and attention to detail.”

Chef Busch’s world-wide approach comes with being a longtime veteran of the Miami food scene, where he worked at venerable establishments such as Gotham Steak, Blue Collar, Cena and the Hyatt Miami Beach. He was also part of the team that launched the Biscayne Home Brew shop near South Beach. And his restaurant was featured on a list of ‘18 Places in Miami to Go When You’re Hungover and Want to Die—great news to those looking for a new brunch destination in the Strip!

Although Chef Busch’s resume is impressive, his ethos regarding the new smokehouse is minimalistic.

“There’s a lot of myth surrounding smoking that includes secret ingredients and techniques—and I don’t believe in any of that,” Chef Aaron said. “I think its instinctual. No gimmicks. Straightforward.”

This principle has led Chef Busch to a hands-on approach to rebuilding the kitchen. While the inside of the 1700 kitchen space has been fitted with state-of-the-art industry equipment including a new convection oven, range and other appliances, the center piece—the custom-built brick wood smoker—was painstakingly built by Chef Aaron with the help of Facilities Manager William Tuscano and other staff members.

“Building the cooking vessel from scratch was an important part of this creative process,” Aaron said. “It’s like a blacksmith—the first thing is to forge your own tools. And then you go from there.”

Additional improvements to the site include an expanded and updated outdoor space with bright new tables, lighting and fencing. A new outdoor drinks menu for the 7,000-square-foot outdoor biergarten will be a welcomed addition to the area’s summer scene.

Pennsylvania Libations has been building a world-class team of beverage industry experts across the state of Pennsylvania. Now, with the introduction of Chef Aaron Busch, they’ve added one of the top chefs in Pittsburgh—one with a fitting past as a home brewer and entrepreneur!

Andy Thomson raises another $50,000 for his campaign for Florida House of Representatives