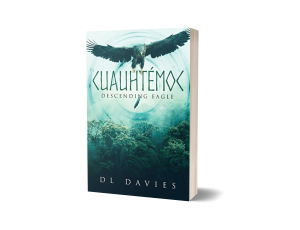 Book one tells of the tale of the Descending Eagle

TORONTO, ONTARIO, CANADA, April 29, 2022 /EINPresswire.com/ — Stories of beginnings capture the attention of anyone interested in the origin and history of beings. In the book released by author D L Davies, “Cuauhtémoc: Descending Eagle,” he tells the fascinating tale of the child named Cuauhtémoc which means Descending Eagle in the old tongue. The book tells of his history and his first foray into the world of battling pirate raiders and to the City of Emperors.

Born in California and raised in different parts of the US including Oregon, Arizona, Florida, Nevada, Idaho, and Montana, author D L Davies is very familiar with adventure. A retired army veteran, he spent the mid-70s in Germany. Among his rich experiences is being a welder and a mechanic. He enjoys outdoor activities such as hiking and fishing and also dabbles in photography. But his favorite pastime is crafting stories, of tales of other times and places, of the current reality of the world, and of alternate ones that are yet to be discovered.

Book 1 of the Cuauhtémoc series introduces the world of the Natomis and begins with the birth of the titular Cuauhtémoc as he learns how to navigate his world. With the training that he received from his elders and the encounters he shared with people, both negative and positive, Cuauhtémoc learns to fly and is trained to deliver mail to different places . An encounter with pirate raiders paved the way to his first battle and subsequently led him to deliver messages for the Emperor at the City of Emperors. However, his adventure does not stop there and readers will be wanting to know what will happen next to Descending Eagle.

Transporting readers to a new world full of adventures with fascinating characters, Cuauhtémoc: Descending Eagle is a delight to avid fans of fantasy.

Macpherson Global, settles in Mexico by the hand of its Ceo-Darek Macpherson

Macpherson Global, settles in Mexico by the hand of its Ceo-Darek Macpherson