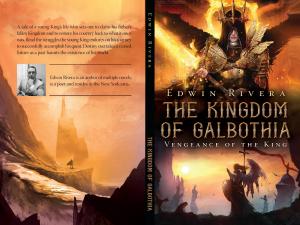 The Kingdon of Galbothia: Vengeance of the King

NEW NOVEL: THE KINGDOM OF GALBOTHIA VENGEANCE OF THE KING”
— EDWIN RIVERA

The Kingdom of Galbothia: Vengeance of the King is the latest work by the creator of the popular Silencers of the Code series.

Author Edwin Rivera’s newest book immerses readers into a fictional Kingdom of Galbothia, and a classic struggle against forces seeking to realign power and radically transform the kingdom’s values. Good and evil clash dramatically, and a young prince is called upon to grow up quickly and rescue both his heritage and his nation.

“My novels are definitely influenced by the daily intrigues of pursuing those who choose to evade justice,” he says. “And they’re a vehicle for my love of narrative, character development and creative plot line. But I likewise found writing an outlet for stresses which sometimes accompanied my unusual line of work.”

Perhaps that is also why his novels feature lead characters gifted in sorting through facts and getting to truth, something his many fans will be happy to find is the case here.

“Galbothia, a land forged by the creator of the universe, becomes an arena of fatality. Meant for peace and harmony, it reels before a force of destructive power determined to interfere with such a blessed existence. Yet readers will understand how a higher force can influence people to a higher standard of commitment, as Galbothians are forced to explore the limits of their willingness to die for each other and for freedom,” says the author.

Published by E-BookTime LLC, The Kingdom of Galbothia: Vengeance of the King is available on their website and at Amazon, Barnes and Noble, and book outlets around the world.

Readers can also visit www.TheKingdomOfGalbothia.com for more on the novel.