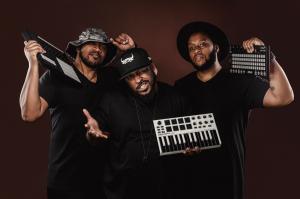 MIME has an incredible reputation in the music industry with such a unique roster of artists, and they’re right here in Memphis in our own backyard! We’re so excited to be a part of their family.”
— Sunny Dizzle of Steaksawse

MEMPHIS, TN, UNITED STATES, December 14, 2021 /EINPresswire.com/ — MIME Publishing, an independent music publishing company that is part of the Made in Memphis Entertainment (MIME) family of companies, has signed a publishing administration deal with Memphis-based production team Steaksawse, which has already worked with artists such as Jay DaSkreet, Brandon BLVD, Roxo, Pyu, Street Prince, and many more. Thanks to its relationship with MIME’s state-of-the-art 4U Recording studios, music distributor Beatroot Music, and sync licensing company Heavy Hitters Music, MIME Publishing will provide well-rounded representation for the Steaksawse catalog worldwide while offering additional services and 24/7 customer service that goes above and beyond most traditional publishing deals.

Formed in 2017, Steaksawse is a Memphis-based production team comprised of members LJ1S, Sunny Dizzle, and KingPin Da’ Composer. Their unique collective flavor is derived from their individual approaches – with LJ1S focusing on The Soul, Sunny Dizzle on The Bounce, and KingPin Da’ Composer on The Composition. Each member of Steaksawse started their individual musical journey between five and seven years old through family members, either by witnessing recording sessions, attending church, or taking piano lessons. They continued to hone their craft through high school and college, challenging themselves and pushing beyond their limits through endless production practice, work with indie artists, and various hardships. In 2017, Roger Rowe (KingPin Da’ Composer) started a producer battle league called Let’s Get Loud. After the event, Sunny Dizzle put out a request to collaborate and the other members of Steaksawse responded. It was there that they met and created the unique and dynamic group heard today.

“Paul Katz and the team at MIME Publishing have continued to bring A-class songwriters and producers to the MIME family, and Steaksawse is no exception,” said Tony D. Alexander, President and Managing Director of MIME. “We’re excited to help them grow and bring them new opportunities in the years to come with their unique sound and expertise.”

“Being a part of MIME Publishing is a dope situation for all of us,” said Sunny Dizzle of Steaksawse. “MIME has an incredible reputation in the music industry with such a unique roster of artists, and they’re right here in Memphis in our own backyard! We’re so excited to be a part of their family.”

MIME Publishing’s recent successes include holding a stake in several songs from Moneybagg Yo’s hit album A Gangsta’s Pain, which debuted at #1 on the Billboard 200 chart and reached the summit again on its third week of release. MIME Publishing producers and songwriters YC and RealRed both made the Top 6 of five different Billboard charts thanks to their work on the album, with YC topping both the R&B/Hip-Hop Producers and Rap Producers charts. For more information on MIME Publishing and the MIME family of companies, visit www.mimecorp.com.

About Made in Memphis Entertainment (MIME)
Made in Memphis Entertainment (MIME) is a Black-owned full-service entertainment group with global reach, but with its heart in the hometown of modern American music. Founded in 2015 by original Stax Records songwriter and Songwriters Hall of Fame inductee David Porter (CEO) and 20+ year business and legal veteran Tony D. Alexander (President and Managing Director), MIME is dedicated to re-establishing Memphis as a key music industry hub while expanding its influence around the world, all while developing and promoting diverse talent on both the creative and business sides of the industry.

MIME’s family of companies includes MIME Publishing, an independent music publishing company that handles Porter’s legendary post-Stax songwriting catalog and other copyrights of some of the most sought-after young producers in Hip-Hop and R&B; Heavy Hitters Music, a film, TV, and ad sync company with an all-female creative team and Emmy-winning music catalog; Beatroot Music, a leading independent music distributor, as well as its subsidiary Beatroot Africa; and 4U Recording, a state-of-the-art recording studio brand with locations in Memphis and Atlanta.

Multimodal Transportation Market to Expand with Significant CAGR During 2021–2030

Multimodal Transportation Market to Expand with Significant CAGR During 2021–2030