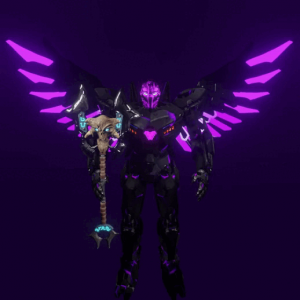 MekaRim aims to take the gaming concept to the next level with its high-tech approach to P2E gaming.

WILMINGTON, DELAWARE, UNITED STATES, May 1, 2022 /EINPresswire.com/ — MekaRim, the 3D NFT project that’s making a big splash in the gaming world, is poised to change how the world views gaming. As the most-awaited next-generation P2E project, MekaRim has shown a lot of promise and potential.

“Secure your spot on MekaRim Whitelist, the best upcoming NFT project 2022,” says the spokesperson for MekaRim. “MekaRim is an upcoming the next blue-chip NFT project that has its own metaverse “Alphaverse. It is an NFT Project with the most promising road map.”

The trending NFT project is about a multi-cultured team with different backgrounds and specialties aiming for one mission – the mighty MekaRim NFT. Gaming enthusiasts can join MekaRim NFT discord server and be a part of one of the top NFT projects for July 2022.

MekaRim NFT is a collection of 10,000 generative Mekas with hundreds of elements. In this 3D P2E game, each artwork is the future avatar of the player in a P2E game. The game aims to provide uniqueness to each Meka. The goal is to ensure quality over quantity.

The story of the NFT is about rapidly spreading chaos all around the global. In this story, No one knows where Aliens came from or what they want.

The game marks a portal between dimensions. The humans are on their radar as their next target. However, they were unaware of the powers of MekaRim Mekas. In the game, the humans join forces to stand up and fight the aliens. But there is the element of surprise as the Aliens seem too strong even for the Mekas.

The story states that humans were defeated. Escaped earth looking for another planet with their damaged Mekas to start over. But that didn’t last for long. As they found themselves forced to fight again and reclaim Earth.

The MekaRim NFT Roadmap showcases the company’s goals and the future of MekaRim. The MekaRim team is working on a set of brilliant ideas and concepts. They are committed to creating a gripping experience for gamers.

“Our first objective is to build out a multiplayer P2E game,” the spokesperson adds. “From there, we will develop it further to have quests, group activities, and potentially even death matches. The community will also help us decide the direction that the game will evolve over time.”

About:
MekaRim is a multi-cultured team of individuals from different countries, professions, and backgrounds. They are experienced in developing blockchain, games, 3D designing, animation, and advertising. They drew their inspiration from the transformers for planning and building such a big project with a huge roadmap and unique concept. They will also be launching their own token and a full game.

For more information and to check the MekaRim story and their roadmap on www.mekarim.com
Media Contact Details

Rasco Rasiehl, a DJ and Music Producer from Poland, releases two new singles; another is in the pipeline.

Rasco Rasiehl, a DJ and Music Producer from Poland, releases two new singles; another is in the pipeline.