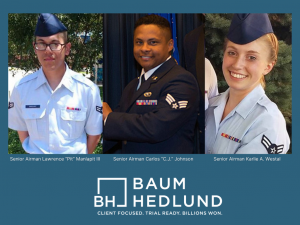 An Ada County judge will allow allegations for punitive damages against defendants involved in a 2018 truck accident in Boise that killed Air Force members.

This conscious disregard for human life warrants punishment, and we have every intention of holding all responsible parties accountable for their misdeeds to the fullest extent that the law allows.”
— Clay Robbins, Lawyer for the Manlapit Family

Earlier this year, attorneys representing the families of those killed in the crash asked the court to grant a motion to allege punitive damages against Albertsons Companies, Krujex Freight Transportation Corp. (KFTC), Penhall Company, and Specialty Construction Supply Company for their roles in causing the accident. The court filings allege the defendants engaged in a series of “outrageous” and “reckless” decisions that led to the crash that killed 26-year-old Senior Airman Lawrence “Pit” Manlapit III, 23-year-old Senior Airman Carlos “C.J.” Johnson, and 21-year-old Senior Airman Karlie A. Westall.

1. The judge granted plaintiffs’ motion to add punitive damages against Krujex, Penhall, and Specialty Construction, noting that plaintiffs assembled sufficient evidence to show “reasonable likelihood” that at trial they could “by clear and convincing evidence” show that conduct on the part of those three companies was “oppressive, fraudulent, malicious or outrageous.”

2. The judge also granted plaintiffs’ motion to assert for joint and several liability against the defendants in two groups:

“We are gratified to have the opportunity to pursue punitive damages and vindicate our clients’ rights, given the reckless and extreme deviation from reasonable standards of conduct by these companies,” says Baum Hedlund Aristei & Goldman attorney Clay Robbins III, who represents the Manlapit plaintiffs.

“While presently there are no punitive damage allegations against Albertsons, we are confident that the evidence we will have admitted at trial will demonstrate that Albertsons is no different than the other defendants in this case; they all chose to cut corners on safety in the name of saving some money, and three young lives were lost as a result. This conscious disregard for human life warrants punishment, and we have every intention of holding all responsible parties accountable for their misdeeds to the fullest extent that the law allows.”

According to Robbins, the case is slated for bifurcated trial on February 22, 2022 in The District Court of the Fourth Judicial District of the State of Idaho, In and For the County of Ada. Bifurcation creates two phases for trial. The first phase addresses evidence relevant to causation. If the jury finds that the defendants caused the crash, plaintiffs proceed to the second phase, which focuses on the defendants’ knowledge, conduct, and damages (both compensatory and punitive).

Which are the top companies hold the market share in global liquid dietary supplements market?