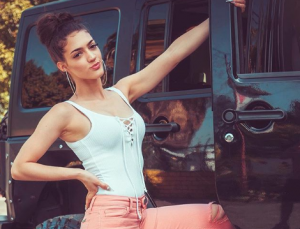 The pop singer put in serious effort in the process of writing, recording, and filming the video for the song, which after only a few weeks on YouTube, has amassed nearly 100k views, and is being well received by her audience. Samantha J is an up-and-coming star, that has been making music and refining her craft for years, and now she is starting to get some of the recognition she deserves alongside her independent label “Anka music group”.
Growing up in the countryside in Ocho Rio, Jamaican beauty Samantha
J started watching her career blow up when she was discovered at a talent
search at the age of 16 with a string of hit songs, including ‘Tight
Skirt,’ ‘League of My Own,’ ‘Bad Like Yuh,’ ‘Rockets,’ and ‘Baby Love’,
garnering more than 40 million Youtube views, a record deal, a spot on
the Billboard Charts, a tour with Sean Paul, and launching her modeling
career.

Now 25, the new mom to son Trillion, is back with her first new song in
over two years, BIG FAT BENZ. According to the artist who fuses reggae
music with dance hall and pop, Big Fat Benz, which she also wrote, is
about empowerment and having fun. It certainly can be challenging to be a mother and also a pop star, yet somehow, Samantha J manages to pull it off with ease, like she was born to be a star!
“Big Fat Benz” is out now on Spotify and Apple Music, and it is one incredible song that fuses multiple genres together, and keeps it bumping throughout the entire track!

Soft Robotics Market Size is Expected to Reach $3.41 Billion by 2027