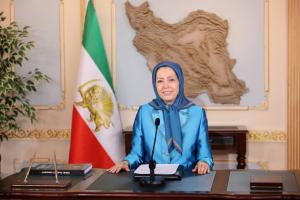 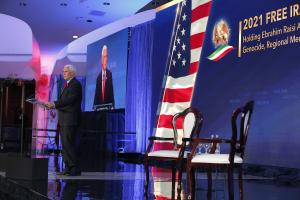 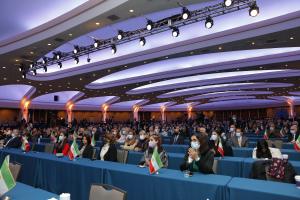 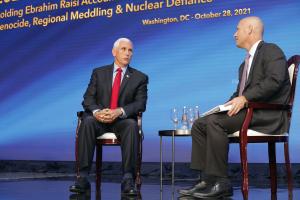 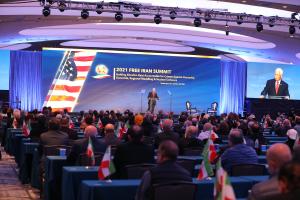 The Free Iran 2021 Summit in Washington, DC. was sponsored by Iranian American Community of California and California Society for Democracy in Iran.

Mrs. Rajavi is an inspiration to the world. Her Ten-Point Plan for the Future of Iran will ensure freedom of expression, freedom of assembly, and freedom for Iranians to choose their elected leaders.”
— The 48th Vice President of the United States, Mike Pence

WASHINGTON, DC, USA, October 29, 2021 /EINPresswire.com/ — The 48th Vice President of the United States, Mike Pence and other political leaders, along with hundreds of Iranian American Community leaders attended the Free Iran 2021 Summit in Washington, DC. The speakers and the Summit called for a decisive Iran policy and demanded Ebrahim Raisi and the regime he represents be held accountable for nuclear defiance, regional meddling and the 1988 massacre of 30,000 political prisoners.

Addressing the event virtually, Mrs. Maryam Rajavi, the President-elect of the National Council of Resistance of Iran (NCRI) said, “With Raisi and his cabinet, dominated by IRGC commanders, and a policy of contraction, Khamenei intends to preserve his fragile regime. However, the crises are so deep, and the gap between the people and the regime is so wide, that Khamenei can neither resolve these crises nor contain the public anger.” Mrs. Rajavi also called on, “the international community and world leaders to adopt their policy on Iran in line with the Iranian people’s desire, and to identify Iran with its people and not with its criminal rulers.”

In his first speech on Iran since leaving office, former U.S. Vice President Mike Pence said, “I’m confident I speak for the views of tens of millions of Americans. And I tell you with certainty that the American people support your goal of establishing a democratic, secular, nonnuclear Iranian Republic that derives its powers from the consent of the governed.” Mr. Pence referenced ongoing crimes against humanity in Iran and said Iranian regime president, “Ebrahim Raisi must be removed from office by the people of Iran, and he must be prosecuted for crimes against humanity and genocide.”

Mr. Pence also praised the brave “Resistance Units” who are working against tyranny inside Iran and added, “One of the biggest lies the ruling regime has sold the world is that there’s no alternative to the status quo. But there is an alternative, well organized, fully prepared, perfectly qualified and popularly supported alternative called the MEK [Mujahedin-e Khalq]. The MEK is committed to democracy, human rights and freedom for every citizen of Iran, and it’s led by an extraordinary woman. Mrs. Rajavi is an inspiration to the world. Her Ten-Point Plan for the Future of Iran will ensure freedom of expression, freedom of assembly, and freedom for every Iranian to choose their elected leaders.”

In a discussion moderated by his Chief of Staff, Mr. Marc Short, the former U.S. Vice President addressed a host of Iran policy topics and reminded the audience that by 2020, the U.S., “had managed to isolate Iran diplomatically and economically as never before.” In response to Mr. Short’s question on the maximum pressure policy, Mr. Pence expressed hope that the current U.S. administration, “or future leaders will put us back on the path of strength because that was creating an environment that was isolating Iran and creating the conditions for peace in the region.” He defended the U.S. decision to eliminate IRGC Quds force commander Qasem Soleimani to a cheerful audience applause. A brief video from Iran showing people’s joyous reaction after Soleimani was killed, was then played for the audience.

“The greatest threat that the United States faces today is from the regime in Tehran,” said former Senator Joseph Lieberman in his remarks. “It has enabled aggression and subversion in the region, and is bringing untold suffering and death to the people of Lebanon, Syria, Yemen, Iraq, and of course in Iran,” Mr. Lieberman noted. The former Vice Presidential candidate also stressed the need to prosecute Iranian regime president Ebrahim Raisi and said, “Instead of occupying the office of the president of a great country like Iran, Raisi should be arrested, taken to The Hague, and put on trial for crimes against humanity and the crime of genocide.” He then questioned, how anyone, “in the leadership of our closest allies and the Biden administration,” can “believe that an effective agreement on nuclear weapons or anything else can be achieved with this regime?”

Judge Michael Mukasey, the 81st U.S. Attorney General highlighted clerical regime’s nuclear defiance and terrorism and said, “Since [Raisi] took office, we’ve witnessed the escalation of threats of missile launches, attacks by unmanned aerial vehicles and other instruments of destruction.” He described the negotiations on Iran’s nuclear program, “as toying with the concept of a nuclear free Iran, and simply running the clock while work proceeds toward enriching uranium at ever higher levels.” Judge Mukasey also spoke to the regime’s abysmal human rights record and said international “response should be unrelenting pressure and open willingness to deal with individual members of the regime, including Raisi himself.”

In his remarks, former Senator Robert Torricelli (D-NJ) warned how, “The leadership in Tehran has gone from bad to selecting a war criminal, a leader of a genocide, as president.” Senator Torricelli praised the role of the Iranian resistance and said, “There is one organization that has never compromised with terror, never sat at a table and divided up your freedoms, never participated in genocide, isn’t responsible for your poverty. There’s one and that one organization has the means, the leadership, the focus, the international support to rejoin the international community. That organization is the MEK, and Madam Rajavi is its leader.”

General James Conway, 34th Commandant of the Marine Corps, urged the European nations to refrain from dealing with Raisi’s regime, which he said will only strengthen the regime. “Iran now has a criminal for a president. Raisi has the blood of 30,000 of your countrymen on his hands. He was one of four members of that infamous Death Commission that oversaw 30,000 executions in 1988,” he said.

Ms. Hannane Amanpour, a member of the Iranian American community, whose father was killed by the regime in 1988 said in her remarks, “My father was a good man. He cared deeply about the fate of his homeland, and about preserving human rights and women’s rights. He loved his religion and was repulsed by the idea of fundamental clerics manipulating and distorting it in furtherance of evil.”

The 2021 Free Iran Summit was sponsored by the Organization of Iranian-American Communities. OIAC is a non-profit and non-partisan organization representing the network of Iranian-American organizations nationwide with membership in over 40 states across the United States. OIAC supports the goals of the National Council of Resistance of Iran, and the 10-point plan of Mrs. Maryam Rajavi, the President-elect of the NCRI for a democratic, secular, and non-nuclear republic Iran.

Off Highway Vehicle Engine Market 2028 Forecasts and Analysis by Consumption, Products and Services

Off Highway Vehicle Engine Market 2028 Forecasts and Analysis by Consumption, Products and Services

Light Your Leadership Inc. Shares The Answer to Hybrid Headaches