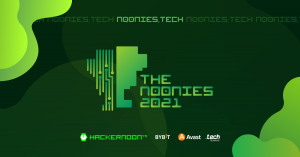 The Noonies 2021 by HackerNoon 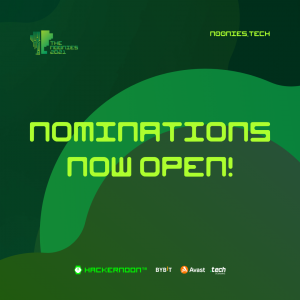 Nominations for Noonies 2021 are now open

This year, we’re hoping to reach even more technologists that are doing behind-the-scenes work for some of the most innovating technology today.”
— David Smooke, HackerNoon CEO

LONDON, UK, November 2, 2021 /EINPresswire.com/ — HackerNoon, the technology publishing platform, launched its third annual Noonies 2021 in partnership with Avast, Bybit, and Dottech Domains. Hundreds of technologists from all over the world were nominated for a Noonies 2021 award; the nominations were curated by the team behind HackerNoon. Further nominations are open to the public at noonies.tech and end on November 14, 2021.

The Noonies highlights the people behind up-and-coming tech, as well as the movers & shakers in the tech industry. There are over 300 Noonies across six major categories: technology, decentralization, development, future, and planet internet. Each Noonie has a minimum of 5 nominees.

“We are excited to bring back the Noonies for the third year,” says David Smooke, HackerNoon Founder and CEO. “Since starting the Noonies in early 2019, we’ve celebrated the contributions of over 2,500 people and products that we thought deserved to be nominated. This year, we’re hoping to reach even more technologists that are doing behind-the-scenes work for some of the most innovating technology today”

Some of this year’s Notable awards are:

“The Noonies is powered by our own voting software,” says Storm Farrell, Full-Stack Developer at HackerNoon. “HackerNoon is — and always has been — where hackers start their afternoons. We built the Noonies to reward and recognize some of the creators behind innovative technology, and to celebrate with the Hacker Noon community.”

“We’re thrilled to be associated with Hackernoon, and their goal of creating the best platform on the internet for tech professionals to get published,” said Suman Das, Sr. Director of Brand Operations, Radix FZC, the registry that operates Dottech Domains. “The Noonies.tech awards speak directly to our love for all things Tech and perfectly align with our mission of building a thriving and inclusive tech community online. Best of luck to all the nominees!”

The Noonies are an annual tech industry awards event, presented online by HackerNoon, built to recognize and reward the most innovative people and products in technology today. Conceptualized in early 2019, Hacker Noon’s first annual Noonies celebrated the contributions of over 500 internally and publicly nominated technologists, thinkers, makers, and leaders in tech. This marks the third edition and will run from October 28, 2021, to January 26, 2022.

Avast (LSE:AVST), a FTSE 100 company, is a global leader in digital security and privacy, headquartered in Prague, Czech Republic. With over 435 million users online, Avast offers products under the Avast and AVG brands that protect people from threats on the internet and the evolving IoT threat landscape. The company’s threat detection network is among the most advanced in the world, using machine learning and artificial intelligence technologies to detect and stop threats in real time.

Bybit is a global cryptocurrency derivatives exchange established in March 2018 and registered in the BVI. It is headquartered in Singapore and has offices in Hong Kong and Taiwan. We have users from all over the world including North America, Europe, Russia, Japan, South Korea, and Southeast Asia. We are focused on serving everyone from individual retail clients to professional derivatives traders. Our technology team includes experts from numerous leading companies such as Morgan Stanley, Tencent, Ping’an Bank, and Nuoya Fortune.

Launched in 2015, .TECH is a leading new domain extension for the tech industry. Over 300K domains and 5 years later, .TECH is in use by some of the world’s most cutting-edge startups and businesses; as well as widely-known industry leaders, content creators, and tech communities. .TECH is owned and operated by Radix, one of the world’s largest registries for new domain extensions. For more information, visit www.get.tech or @dottechdomains

How hackers start their afternoons. Hacker Noon is built for technologists to read, write, and publish. We are an open and international community of 12,000+ contributing writers publishing stories and expertise for 4,000,000+ curious and insightful monthly readers. Founded in 2016, Hacker Noon is an independent technology publishing platform run by David Smooke and Linh Dao Smooke. Get your technology story published today.

Charles Schleifer and His Experience Representing the 9/11 Lost Souls

Charles Schleifer and His Experience Representing the 9/11 Lost Souls

Montana Author Nathan Truzzolino Announces the Release of Middle of the End: A Novel