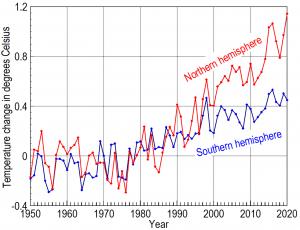 Annual average temperatures in the northern and southern hemispheres based on HadCRUT4 data.. 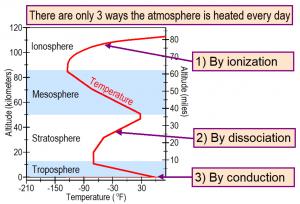 The three ways that Earth’s atmosphere is heated every day. 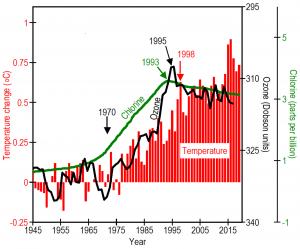 Global warming from 1970 to 1998 is closely associated with increases in tropospheric chlorine from CFCs.

The northern hemisphere, which contains 90% of world population, most major cities, and most air pollution, warmed 70% more than the southern hemisphere

JACKSON, WYOMING, UNITED STATES, December 10, 2020 /EINPresswire.com/ — All major analyses of average global temperatures showed temperatures remained relatively constant from 1950 through 1970. Average temperatures from 2014 through 2019, however, increased 1.7℉ in the northern hemisphere but only 1.0℉ in the southern hemisphere.

Meteorologists have noted for decades that air temperatures in urban areas tend to be substantially warmer than air temperatures in surrounding suburban areas. This so-called urban heat island effect is thought to be caused primarily by human modification of land surfaces. Dark roads and most building surfaces absorb more solar radiation than trees and other vegetation. Trees also provide more shade and more evaporative cooling.

“But there is another process active in urban areas, the dissociation of ozone which has been widely ignored”, says Dr. Peter L. Ward, a geophysicist who worked 27 years with the U. S. Geological Survey. Ward is presenting his conclusions at the annual meeting of the American Geophysical Union (AGU) on December 15. AGU is the largest organization in the world for scientists studying Earth and space systems with 60,000 members from 135 countries. This year’s meeting includes more than 20,000 scientists contributing virtually.

Ward explains in his presentation that there are only three known ways that solar radiation is observed every day to heat Earth’s atmosphere. The first is by conduction when air touches Earth’s sun-warmed surface and the warmed air rises. This is how air is heated above a hot frying pan. And this is how the troposphere, the lowest layer in Earth’s atmosphere, where we live, is heated from below when sunlight is available.

The second way air is heated is by dissociation. Dissociation primarily of molecular oxygen causes the top of the stratosphere, at altitudes of around 32 miles, to be 106℉ warmer than the tropopause at the base of the stratosphere. When a molecule of oxygen, containing two atoms of oxygen absorbs solar ultraviolet-C radiation, the molecular bond is dissociated, which means broken apart. The two oxygen atoms fly apart at high velocity just like the ends of a snapped rubber band. Air temperature is proportional to the average velocity of all atoms and molecules in the air squared. In this way, dissociation turns chemical bond energy directly and efficiently into air temperature.

Then, two atoms of oxygen can collide without reducing air temperature and be dissociated again, making the air warmer and warmer in a cycle that continues until all solar ultraviolet-C radiation has been absorbed before it reaches the base of the stratosphere.

Similarly, a molecule of ozone, containing three oxygen atoms, is dissociated when it absorbs solar ultraviolet-B radiation. The atom of oxygen and the molecule of oxygen fly apart at high velocity, warming the ozone layer. They can recombine by collision and then be dissociated again in a cycle that continues until all solar ultraviolet-B radiation has been absorbed.

The third way air is heated is by ionization that only occurs in the ionosphere, located above the stratosphere. Very high-energy solar radiation separates electrons from atoms and molecules. The pieces fly apart at high velocity, warming the ionosphere.

Ozone is the main chemical ingredient of smog in urban areas. Ground-level ozone pollution is created by chemical reactions between oxides of nitrogen and volatile organic compounds. These reactions are common when pollutants emitted by cars, power plants, industrial boilers, refineries, chemical plants, and other sources react chemically in the presence of sunlight. Ozone pollution damages lungs, irritates throats causing coughing and shortness of breath, and can cause chest pain.

“It turns out,” Ward explains in his presentation, “that no physical way has even been demonstrated for air to be warmed when greenhouse gases absorb infrared radiation from Earth, which does not have enough energy to dissociate or ionize anything.”

The ozone layer is especially important for life on Earth because it normally absorbs most ultraviolet-B radiation that has enough energy to cause sunburn, skin cancer, cataracts, and mutations. Since 1970, you have been at higher risk for these problems.

In the 1960s, manufactured chlorofluorocarbon gases (CFCs) became widely used as spray-can propellants, refrigerants, solvents, and foam blowing agents. Ozone depletion and average global surface temperatures began increasing. In 1974, scientists discovered that CFCs can be broken down by ultraviolet radiation in the stratosphere, freeing atoms of chlorine, and that one atom of chlorine, under the right conditions, can destroy 100,000 molecules of ozone. This work earned the Nobel Prize in Chemistry in 1995.

“Without the Montreal Protocol,” Ward explains, “Earth would probably be at least 0.5℃ warmer today. CFCs are very stable substances. Unfortunately, it will take decades for the ozone layer to recover. Meanwhile temperatures will remain warm in urban areas.”

Ward concludes “ozone depletion played a major role in global warming since 1970 and can explain quite directly why urban areas are warmer than rural areas.”