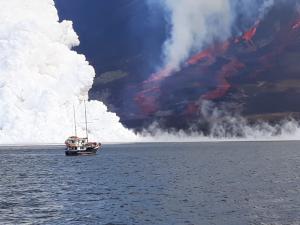 An expedition cruise ship witnesses the 2018 Galapagos eruption up close 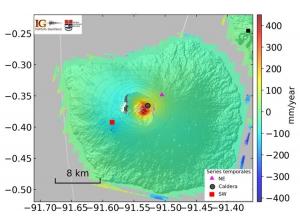 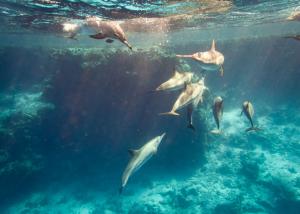 Signs are pointing to an imminent eruption on Fernandina Island in Galapagos, providing a once-in-a-lifetime chance to witness a marvel of nature.

Witnessing the power of nature at such close proximity is truly a mind-numbing, breathtaking once-in-a-lifetime experience”
— Heather Blenkiron, TridAdvisor Destination Expert for Galapagos

PUERTO AYORA, GALAPAGOS, ECUADOR, November 15, 2021 /EINPresswire.com/ — The Ecuadorian Geophysical Institute announced on Friday that significant deformation of the Fernandina volcano in Galapagos has been occurring over the past 18 months. It went on to explain that this deformation is frequently associated with impending eruptions as deep magma makes it way closer to the surface.

Fernandina is one of the most active volcanoes on the planet, erupting every few years. The last most impressive eruption occurred on in June 2018. Fissures along the volcano’s slopes let out jets of lava for several days, producing lava rivers that flowed into the sea. Expedition cruise ships in the area were able to approach and witness one of nature’s most impressive spectacles.

Fernandina volcano is located on Fernandina island, the westernmost island in the archipelago. It’s the youngest of the Galapagos islands. Completely uninhabited, it is generally considered the largest, most pristine island in the world, accessible only via expedition cruise ship. There is only one visitor site on the island, where tourists can disembark and walk along a marked trail to witness its rugged landscape, and walk among marine iguanas, sea lions, flightless cormorants, Darwin’s finches and preening penguins.

The island is bathed by deep ocean Cromwell current. The current rises to the surface around the island, bringing with it nutrient rich waters which sustain diverse and abundant marine species. Several species of dolphins and whales are common in the waters here, as are large schools of tuna, sea birds and other ocean dependent species.

In its announcement, the Ecuadorian Geophysical Institute concludes by saying that the deformations observed could be a indicative of eruptive activity in the medium-long term (weeks to years). Usually, eruptions in Galapagos have a lifespan of several days to a few weeks. Witnessing them from the deck of your small ship is an absolutely unforgettable experience – but sadly one that cannot be planned for ahead of time.

HOW TO VISIT GALAPAGOS: Located 1000km (600 miles) of the coast of Ecuador, on the equatorial line, Galapagos can be only reached by domestic flights from the Ecuadorian mainland (Quito or Guayaquil). To get the most out of a visit to the islands, seasoned Galapagos travel advisor Heather Blenkiron at CNH Tours recommends a small expedition cruise ship following an 8 day uninterrupted itinerary. Over 60 ships ply Galapagos waters, ranging from 12 to 100 passengers. Most carry 20 or fewer guests in all comfort classes – an ideal size to be navigating the archipelago, experiencing otherworldly landscapes, walking wilderness trails and snorkeling pristine waters. Contact CNH Tours for help in planning for your Galapagos trip of a lifetime.