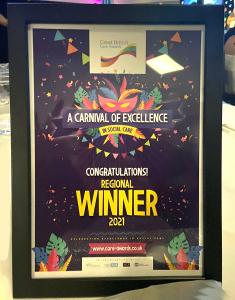 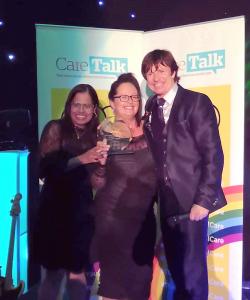 The Badger Wing Team at Foxburrow Grange Care Home are officially the ‘Best Care Team’ in the East of England according to the Great British Care Awards.”
— Bonnie Longfoot

COLCHESTER, ESSEX, UNITED KINGDOM, November 9, 2021 /EINPresswire.com/ — The Badger Wing Team at Foxburrow Grange Care Home are officially the ‘Best Care Team’ in the East of England according to the Great British Care Awards.

This is a fabulous accomplishment as hundreds of nominations are submitted to the Awards each year.

Based near the Army Garrison in Colchester, Essex, Foxburrow Grange provides residential, nursing and dementia services to 69 people with a range of care needs including Dementia, Parkinson’s, general and specialist nursing, and end of life care.

The team were shortlisted as finalists because of the wonderful work they do, not least the amazing transformation of one of the residents who came to Foxburrow Grange needing care and support.

Following the nomination entry and a subsequent interview with judges online in early October, members of the team attended the gala dinner at The East of England Arena, Peterborough on 28th October. Around 300 people came together to promote best practice in the care sector and to celebrate the amazing work of care staff.

The team had a wonderful evening, culminating in them winning their category. They will now progress to the national finals which take place next year.

The Best Care Team award recognises a team who best demonstrate a shared vision and agreed goals; a team who have a leader whose role is known and accepted and who takes personal responsibility for their tasks. The award acknowledges the team that has an excellent communication process and each member’s skills are recognised within the team. The award also recognises the team that demonstrates a commitment to dignity and privacy for clients and also respect for team members is paramount.

Badger wing specialises in caring for, and supporting people, with dementia. People may have lost the ability to take care of themselves, but the team sees beyond that prognosis and actively supports them to become more independent and enjoying life.
Since applying the Montessori method for people with dementia and ageing at Foxburrow Grange, the wing, the residents and the home as a whole, have gone from strength to strength.

“Being up against 13 other care homes I was really nervous when they called Foxburrow Grange Badger Wing. We jumped in the air and felt so proud of our team, as we are a fantastic bunch. I’m overwhelmed, so happy!”

Lola Richards, Home Manager, said, ‘Winning this award is a fantastic achievement. We are extremely proud of the Badger team who, along with all staff at the home, continue to do exceptional work with such passion and dedication.’

Foxburrow Grange is owned by Outlook Care which is a not-for-profit organisation that has delivered person centred support and care to people since 1990. Outlook Care provides support and care to people with a learning disability, those with mental health needs and older people across north and east London and Essex.
Maximising independence and enabling people to have choice and control over their lives is central to its work.