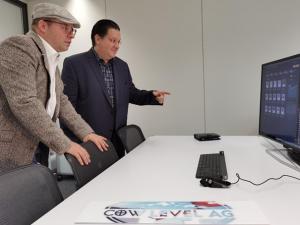 ROTKREUZ, SWITZERLAND, November 24, 2021 /EINPresswire.com/ — The Zug-based start-up Cow Level AG from Rotkreuz will now be one of the first companies in the SME | X segment to be listed on the new exchange for tokenized shares of Berner Kantonalbank in cooperation with the digital share platform daura. The shares will be listed under ISIN CH1138775247. Cow Level is offering 50,000 ordinary shares with voting and dividend rights at an issue price of CHF 5.50. The shares are compliant with the Swiss digital asset legislation adopted in March 2021. Trading is scheduled to start as of early December 2021.

Cow Level AG is a fintech start-up and has developed the First international Play Money Exchange (FiPME), an exchange for the booming growth market of gaming & e-sports. The gaming market today already comprises around 2.8 billion gamer and a turnover of around 160 billion US dollars (as of 2020). Virtual items such as in-game items can be traded on the FiPME platform. In this way, Cow Level wants to take account of the “play to earn” approach, which is important for the future. FiPME is to become a central hub in the gaming ecosystem, connecting gamers, game publishers, companies with advertising ambitions in the gaming market, financial market players and other stakeholders. The virtual in-game economy is considered one of the future cornerstones of the virtual world, which has once again gained importance in the wake of the emerging metaverse megatrend.

The FiPME platform has already been live for a few weeks and is recording continuously increasing user numbers. In 2022, the range of games on FiPME is to be permanently increased and the platform is to be further developed on an ongoing basis with user feedback.

Why “Heavy Metals Are Always Harmful” Is a Lie

Why “Heavy Metals Are Always Harmful” Is a Lie