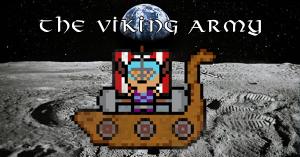 The Viking Army has arrived…

TURLOCK, CALIFORNIA, UNITED STATES, November 3, 2021 /EINPresswire.com/ — Jerry Gomez, the original trusted developer of the WallStreetBets Token, has launched a new NFT project. The Viking Army, hailed as the next CryptoPunks, has just been released on Opensea. With Elon Musk’s Tweet, any and all projects released after his tweets become extremely successful fairly quickly.

Gomez’s latest project shifts to the NFT space with The Viking Army. Gomez had one specific goal in mind when he began the NFT project – to make people rich. The mission is to become the largest hoarders of ETH and make gains. The Viking Army are RICH because they are full of treasure and loot. (Gold, Silver and ETH)

“These Vikings are going to be the next CryptoPunks and will make all early investors massive profits,” Gomez said.“ They are already released and at the ground-floor price of about $100. The Viking Army is so powerful Elon mentions them landing on the Moon. They are the next big OpenSea NFT Release according to many on Twitter buying into the project.

The total “The Viking Army” supply is 12,222, and each costs 0.023 ETH or 50 Polygon/MATIC. There are 1,200 total items minted so far with super rares spread throughout the collection. Purchases are limited to 40 at one time. The project is currently publicly traded, and The Vikings can be used in any manner, though Gomez suggests that minters use them to get rich.

By entering into The Viking Army now, minters will be joining at the beginning of the launch before trading volume increases. Gomez said he expects the project to grow by by tens of millions of dollars per year in the fast-emerging, billion-dollar NFT market.

“Investing in the next CryptoPunks NFT now is the wisest financial decision one can make. If something cost you the price of a couple Video games now but has the potential to hit thousands of dollars, it is only reasonable to get a Viking now at $100,” Gomez added.

For more information on The Viking Army drop or Gerardo Gomez, visit TheVikingArmy Website or watch the video on YouTube. People can also follow the project on Twitter, Discord and Telegram. All links are below and on the site.