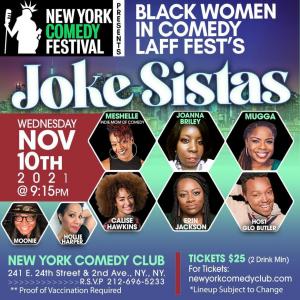 In a confusing year full of uncertainty, pandemic fatigue, remote learning, Zoom meeting burnout and a laundry list of other 2021 challenges, we could all use a good laugh!  Since laughter is the best medicine, come get a full dose of chuckles with some of the most talented comedians in the world.  For the first time ever, as part of the New York Comedy Festival, Black Women In Comedy Laff Fests’s, Joke Sistas will be performing November 10th, 2021 at the New York Comedy Club featuring Joanna Briley, Meshelle “The Indie Mom Of Comedy,” Calise Hawkins and many more!  Created in 2004, the New York Comedy Festival is a comedy festival featuring more than 200 comedians performing in more than 100 shows at venues throughout the city. The festival is produced by Caroline’s On Broadway.

The amazing and hilarious women of Joke Sistas are all incredible, accomplished performers with an arsenal of unique stories and diverse backgrounds.  Joanna Briley, the founder of Black Women In Comedy Laff Fest is a premier comedienne!  A shining star on the comedy circuit and true visionary, Joanna created the Black Women In Comedy Laff Fest and Joke Sistas to showcase the brightest and funniest Black Women, those who identify as women and those from the LGBTQ+ community, in a safe space for Black Women in comedy to shine. “I believe the Black Women in Comedy Laff Fest represents a close knit sisterhood filled with hilarious Black Women who understand the assignment,” Briley says.  “We are NOT monolithic, we are strong advocates for telling it like it is with love, emotional dexterity, and punchlines!”

Calise Hawkins is a stand-up comedienne and writer. She has performed her standup on Late Night with Jimmy Fallon (NBC), Russell Simmons Presents, Live At The El Rey (Comedy Central), among others.  She has written for Comedy Central’s @midnight and Hood Adjacent, MTV’s Totally Clueless, Girl Code and Charlemagne’s Uncommon Sense and she was a cast member of Oxygen’s Funny Girls.

Meshelle The Indie-Mom Of Comedy is a wife, mother of three and sought after comedienne whose appearances include: Nickelodeon’s Search for the Funniest Mom in America 3 (Hosted by Roseanne Barr), Martin Lawrence Presents: The First Amendment Stand Up (Starz), The Blacklist: 20 Most Notable and Notorious Moments of 2009 and 2010 (TV-ONE); BET News Presents, Obama: Journey to the White House, as well as BET’s ComicView (2014).

Mugga currently stars in NBC’s Manifest and appeared as a series regular on the Emmy award-winning Orange is the New Black.

Erin Jackson is a writer on the second season for the Emmy-nominated show, The Upshaws (Netflix), starring Mike Epps and Kim Fields and executive produced by Wanda Sykes and Paige Horowitz.

Code: JOKESISTAS for a discount!

About the New York Comedy Festival:

About the Black Women In Comedy Laff Fest:

Joanna Briley, comedienne, successful producer for over ten years and founder of the Black Women in Comedy Laff Fest, noticed a lack of diversity in comedy and recognized the need to amplify the hidden yet ever-present comedic voices of Black Women in the comedy and LGBTQ+ communities. By creating a platform for so many diverse, powerful, yet often overlooked voices, Briley’s goal is to continue building solid relationships within the entertainment industry for years to come. The second annual Laff Fest, a comedy club “crawl” around Brooklyn in June 2021, saw a surprise guest performance from Sam Jay (Netflix, SNL, Jimmy Kimmel Live).