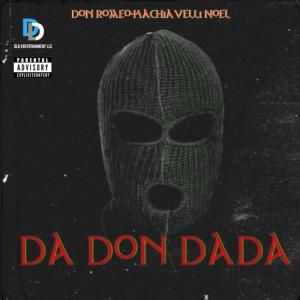 BROOKLYN, NEW YORK, USA, October 30, 2021 /EINPresswire.com/ — Over the course of the past year, the professional partnership between DLD Entertainment LLC and Rap legend Don Romeo-Machiavelli Noel has lit up the internet with bangers like “DND Da Monster,” “GON/KILLUA” and “Boondox Kyd,” resulting in a groundbreaking series of viral hits that have pushed the man straight to the next-level where he deserves to be.

On Tuesday, November 9th – Don Romeo is set to exceed all expectations as he surges into the final quarter of 2021, with “Da Don Dada” – a gritty underground anthem designed to remind the rest of the emcees in the game who number one really is.

Through the hard-hitting dynamics of Don Romeo’s tactical verbal skills, vivid imagery, and raw lyricism, combined with the hard hitting beat produced by C-Sharp – “Da Don Dada” is all-out larger than life. This collaboration is undeniably in full-effect, and ready to take the world by storm. With ice-cold rhymes and red hot bars, Don Romeo spits with pure precision & power, delivering “Da Don Dada” with the supreme talent & resonating confidence that listeners around the world know his name to be entirely synonymous with.

You already know what it is, so let’s turn it up for the brand-new single “Da Don Dada” by Don Romeo-Machiavelli Noel on November 9th. Being released across every major music platform online, with the full support of DLD Entertainment LLC, and featuring the masterful production of C-Sharp.

“Da Don Dada” is fully guaranteed to succeed by every conceivable definition and measurement, and become yet another massively addictive single added to Don Romeo’s catalog for y’all to thump in the streets.

Da Don Dada takes no prisoners, leaves nothing on the table, and speaks literal volumes on behalf of the fact that no one else does it like Don Romeo, cause he wants it all.

Bioinformatics Market becoming larger and Massively Growing up with CAGR of 13.4% | AMR

Bioinformatics Market becoming larger and Massively Growing up with CAGR of 13.4% | AMR

India gears up for its biggest Datacentre and Cloud spectacle ever