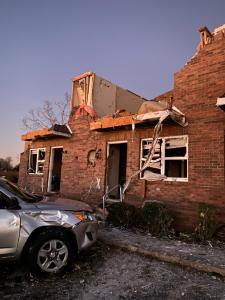 This is all that is left of a domestic violence advocate’s home in Western Kentucky. Donate to DV Victims Emergency Fund at www.kcadv.org. 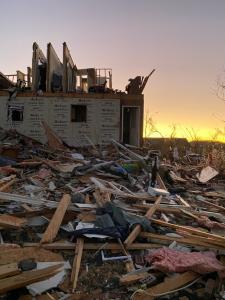 This is all that is left of a domestic violence advocate’s home in Western Kentucky. Donate to DV Victims Emergency Fund at www.kcadv.org.

Many domestic violence victims as well as the staff who serve them have lost their homes or become displaced as a result of the tornadoes that ripped through their communities last weekend.

The emergency fund will immediately provide relief for emergency housing, food, water, transportation, and other basic resources that are urgently needed.
Two of KCADV regional shelter programs, the Barren River Area Safe Space in Bowling Green and Merryman House in Paducah/Mayfield areas were among the hardest hit.

Both programs’ physical structures were not damaged beyond loss of utilities, but the same cannot be said for clients and staff, whose homes and possessions were destroyed overnight, or who were otherwise displaced. Even area residents who have shelter may not have electricity, water, or ways to get food and other resources.

With a widespread lack of cell phone and internet service in the region, not all of the programs’ survivors have been accounted for, with staff conducting door to door well checks in person for clients who do not reside in shelter.

“We have not been able to get in touch with all of our clients yet. We’re trying to go door to door to lay eyes on them and make sure they’re okay,”
says Tori Henninger, Executive Director of the Barren River Area Safe Space, which serves Logan, Butler, Warren, Simpson, Edmonson, Allen, Barren, Hart, Metcalfe, and Monroe counties.

In the far Western corner of the state, Dr. Mary Foley, Executive Director of Merryman House, has also had to conduct in person well-checks due to
lack of phones or internet service. Merryman House’s service area includes the decimated town of Mayfield, as well as Ballard, Calloway, Carlisle, Fulton, Graves, Hickman, Marshall, and McCracken counties.

“I know the pictures are horrific, but they do not really show the full depth of devastation,” says Foley, who has been in crisis triage mode since last
Saturday morning.

One of Foley’s first triage obstacles was to help a client who uses an oxygen tank to get to a safe medical facility.

Both Foley and Henninger say immediate support for housing, food, clothing, and transportation is urgently needed.

The emergency fund is flexibly designed to meet emerging needs as they arise, such as loss of wages due to workplace closure, repairing damage to or replacing vehicles, and lack of access to childcare, in addition to rebuilding and restoring living arrangements and lives.

Henninger says that conventional sources of emergency aid might not be an option for certain survivors who fear being located or contacted by their
abusers.

One survivor that BRASS helped find shelter feared accepting help from the Red Cross–which publicly lists the names of those it serves in
order to connect folks with loved ones in a crisis–because of the possibility that her abuser might be able to locate her.

In addition to immediate help for basic needs, Foley and Henninger and their respective staffs are concerned about the increased risk of further
violence and abuse as the disaster relief unfolds.

“When we think about why clients return to abuse situations, that is the exact climate that we are in right now,” says Foley, who cites lack of access
to communication such as phone and internet as well as the physical necessity for basic shelter in an emergency as some of the contributing
factors that increase the risk of incidents of violence.

Both Merryman House and BRASS shelters and programs remain open and operational, despite spotty phone and internet service, and staff remain
focused on their primary mission of serving domestic violence survivors, who still need help staying safe from abusive relationships.

“DV crisis calls and day to day shelter operations never stop, not even for natural disasters or pandemics, both of which can intensify risks of further incidents of violence,” says Yannelli. “No matter what, we are there for survivors and for each other.”

Those wishing to give to KCADV’s emergency fundraiser can do so by visiting www.kcadv.org.

Tips for Maintaining Recovery During the Holidays from Akua

On Friday, a mob in Sialkot tortured & killed a Sri Lankan plant manager accused of blasphemy before burning his corpse

Tips for Maintaining Recovery During the Holidays from Akua

On Friday, a mob in Sialkot tortured & killed a Sri Lankan plant manager accused of blasphemy before burning his corpse