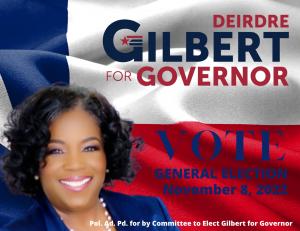 Vote for Deirdre Gilbert in the General Election 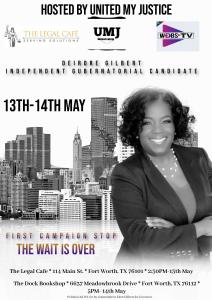 Deirdre Gilbert Running for Texas Governor as an Independent

Gilbert shares her passion for the state of Texas, fighting to get her name on the ballot.

The Texas people are beyond ready to be listened to, and I am bringing their voices to a place where they can finally be heard and real change can be made. We are in a real fight. ”
— Deirdre Gilbert, Running for Texas Governor

FORT WORTH , TEXAS, UNITED STATES, May 2, 2022 /EINPresswire.com/ — The first campaign stop for Independent Gubernatorial candidate Deirdre Gilbert is next week at the Legal Cafe in Fort Worth. Disgusted with the 2-party system, Gilbert is running as an Independent and is fighting to get her name on the ballot.

Gilbert was the first candidate to file for the Governor of Texas. Overall, she was the first candidate to follow the rules. She’s been told she has to get 80,000 signatures while no one else has to do that. Independent candidates are the only group that has to overcome the hurdle of collecting 83,000-plus valid signatures, with no options to pay a filing fee or collect the minimum of 5,000 that Republicans, Democrats, and Write-In candidates have the opportunity to do. “I’m just trying to figure it out,” says Gilbert. “I keep wrestling with is it even worth it to go through the process if it’s impossible to even get my name on the ticket. They are making up rules, and they’re even breaking their own rules.” Running as an independent, Gilbert’s not listed on the upcoming ballot.

“It’s a corrupt system where the Texas people won’t even have the option of voting for someone outside the 2-party system,” added Gilbert. Deirdre recently decided to leave the democratic party to run as an independent candidate. “Federal intervention is required. The system is out of control. There’s no accountability. It’s useless. It’s just a shell of nothing.”

On the campaign trail, Gilbert will be the voice for the Texas people who feel dismissed. Gilbert added that “people are beyond ready to be listened to, and I am bringing their voices to a place where they can finally be heard, and real change can be made. They’re looking for an end to party politics. There is a mass exiting of people from the political atmosphere. We are in a real fight for existence, a state and world spiraling out of control.”

About Deirdre Gilbert
Gilbert is an African American woman who has worked tirelessly in her community and is simply fed up with the shenanigans of the political atmosphere. She’s worked on the denial of voting rights in local elections within Missouri City and MUD District issues. She has spoken before the Texas Legislature and U.S. Congress in Washington D.C on civil rights. Gilbert has helped shape legislation regarding whistleblowers, medical malpractice, and education. Deirdre Gilbert is not afraid of a battle and is willing to speak up for those who cannot speak for themselves.

The core of Gilbert’s message is Justice for All. To connect with Gilbert, visit her online at https://gilbert4gov.com; they can go to https://deirdre-gilbert.com or https://nmmaa.org. Gilbert can also be followed on Facebook, Twitter, YouTube, and LinkedIn.