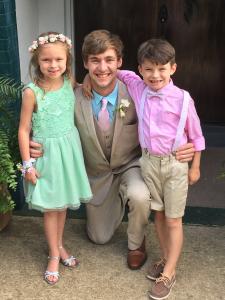 It’s easy to get caught up in a busy working lifestyle, says David Moore—but that’s also not a healthy way to live.

HERNANDO, MS, USA, November 12, 2021 /EINPresswire.com/ — Fatherhood has really shifted perspective for David Hunter Moore—Hernando resident and business owner—according to his most recent comments on being an entrepreneur and owning five businesses. While he has been working the grind since the 10th grade, he says all work and no play isn’t the right way to live. According to his recent statements, he encourages young entrepreneurs to take time for family, self-care and fun.

“There comes a time where you really have to stop and think, ‘Am I getting the most out of this life?’” he explains. “I’ve hit that moment in becoming a father. I’m realizing that my world has been wrapped up in work, and there is so much more to life. It’s so easy to get caught into the daily grind of entrepreneurship. It’s so easy to go, go, go and never say die. But, that’s not healthy, and that’s not what I want for my daughter.”

According to International Labour Organization statistics, more than 400 million people worldwide are putting in 49+ hour work weeks. Elon Musk told the New York Times he spent his 47th birthday pulling an all-nighter in the factory. According to the iconic Tesla entrepreneur, “This has really come at the expense of seeing my kids. And seeing friends.”

David More of Hernando, MS says this is exactly what he is trying to avoid. “I don’t want to look back and realize I missed out,” he explains. “You can’t get back those moments spent in the office or out in the field. You spend so much time and energy on something that doesn’t love you back. Work just demands more and more—it’s unhealthy when you don’t know where to stop.”

Workplace exhaustion is dangerous, leading to prolonged acute stress and physical exhaustion. Yet, studies have shown that working overtime actually lessens productivity. One workplace study noted, “Above a threshold, output rises at a decreasing rate as hours increase.” The study also noted that increased accidents and injuries occurred with long working hours.

Another study looking at 13 years of workplace incidents found that overtime schedules led to a 61% higher injury hazard compared to similar jobs without overtime.

David More wants Hernando residents to come to the same realization he’s now facing: work-life balance is key. “Many already know what I’ve been a bit slow to see,” he says. “When you start as young as I did, it just becomes daily life. But having an actual life is so important. My daughter has already made a positive impact on my life. Work should be part of life and not the central focus of it.”

Bair Energy Announces Chair of Board

Bair Energy Announces Chair of Board