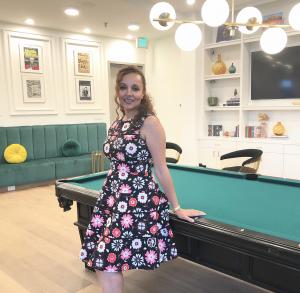 LOS ANGELES, CA, UNITED STATES, May 4, 2022 /EINPresswire.com/ — What’s enough? When are we satisfied? Capitalism’s greatness is that it keeps us motivated—always producing, always expanding. Its fatal weakness is that it leaves us perpetually unsatisfied. There’s always more to get. Just one more thing will make us happy. We may even need to pay therapists to ensure that we are satisfied with our current state.

Cynthia Occelli, acclaimed celebrity life coach, believes that individuals must seek true happiness inwards, not outwards. Happiness does not come from having more,” states Occelli. “It’s the effect of realizing you already have enough. As a celebrity coach, I’ve spent more than a decade assisting celebrities in recognizing when their most important needs are met. Surprisingly, having more money and possessions rarely leads to happiness. In fact, according to a Purdue University study published in 2018, persons who make more than $105,000 a year are less happy.”

Occelli continues, “Once our basic needs are addressed, a pathway emerges for us to become our highest personal expression, as Maslow’s hierarchy of needs implies. Being our best and happiest selves has less to do with having more and more to do with acting in ways that express our best traits. Some of the most powerful producers of happiness are good self-care, meaningful relationships, and being a positive presence in the world. Dissatisfaction, fatigue, and pervasive low-grade depression are all expected outcomes of striving for more and shifting the goalposts whenever one achieves more.”

The great irony about loss and failure is that they ultimately increase satisfaction and contentment. They give us contrast and increased gratitude. This often leads to the realization that the things we want most of all aren’t things at all.

“Getting a brooding celebrity’s attention off of themselves and onto assisting someone in true need is the best approach I’ve found to rejuvenate them. Their own malaise fades and they gain genuine self-worth when they observe the joy and sustenance their acts bring to others. You can do it as well. Give yourself, your loved ones, and the rest of the world the gift of recognizing when you have enough and sharing your positive traits, abilities, and abundance with others. You’ll have a positive impact on yourself and the planet.” concludes Occelli.

In Occelli’s newest podcast, REWRITTEN, she shares the way out of this joy-sapping cycle people put themselves through. Listen and start living a life that feels fulfilling and restorative today. Enough is enough. It’s time to start receiving, enjoying, and expanding.