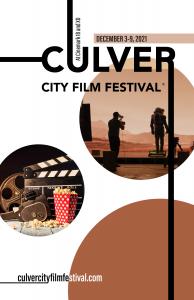 MARINA DEL REY, CA, UNITED STATES, December 3, 2021 /EINPresswire.com/ — Culver City Film Festival 2021 is fast becoming one of the most anticipated events of the year! The annual film festival, organized by Festival Director Jon Gursha and Programming Director Peter Greene, welcomes independent filmmakers back to the theatres. Culver City Film Festival 2021 begins with a kick-off party on Thursday evening, December 2nd at Sorry Not Sorry Bar and Restaurant in Los Angeles. Screenings begin on Friday, December 3rd at Cinemark 18 and XD at The Promenade at Howard Hughes Center (HHLA) in Los Angeles, and will continue through Thursday, December 9th. A “Best of the Fest” awards ceremony and closing night party will follow.

“We encourage filmmakers and audiences back to the theatres as we have two screens and over 350 films from around the world for everyone to enjoy.” “We feel we have created a very special film festival” said Gursha. The event has attracted the attention of individuals as well as international film distributers. The independent filmmaking industry has undoubtedly grown to become a significant part of the global movie market. This year’s Culver City Film Festival will stream some of the Official Selections of the festival for international audiences on the ShortsDaily Roku channel.

Must see highlighted films from this year’s festival include:

The Culver City Film Festival was founded by Jon Gursha and Peter Greene as an independent film festival. Culver City Film Festival offers the independent film community and filmmakers from around the world a platform in the center of the industry. The Festival is a registered trademark. For more information, including the festival programming schedule, please visit CulverCityFilmFestival.com.