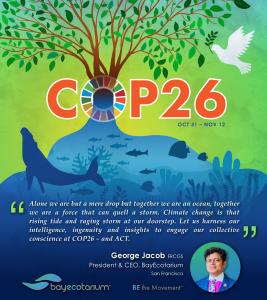 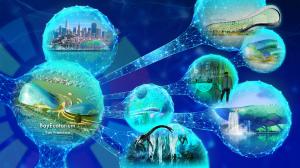 SAN FRANCISCO, CA, UNITED STATES, October 31, 2021 /EINPresswire.com/ — The 26th “Conference of the Parties” scheduled from October 31-November 12 in Glasgow, at the Scottish Events Campus by the river Clyde, often referred to as COP26 will be held under the United Nations Framework Convention on Climate Change (UNFCCC). What began in 1992, has since gathered momentum, visibility and voice to break the environmental policy paralysis and urge governments to take decisive, tangible action.

The withdrawal of the United States from the historic COP 21 Paris Climate Accord under the Trump Administration and the re-joining of the Agreement by the present Biden Administration, will undoubtedly be backed with bold initiatives to cut carbon emissions, among others. While negotiations for the Paris Agreement started in Durban, South Africa at the COP17 with the establishment of the Ad Hoc Working Group, the UNFCCC agreed to establish a working group to negotiate enforceable legal instruments by 2015 at COP21 to come into effect by 2020. Interestingly, 55 parties responsible for 55 percent of global greenhouse emissions ratified the instruments and gave their acceptance to the principles of the Paris Accord to prevent a temperature rise above 1.5 degree Celsius by 2030. The Covid crises has impacted and deferred much of the discourse to the upcoming meeting of the minds in Glasgow. It is therefore becoming abundantly clear that more and more people need to be made aware of the impending juggernaut of climate change to then start thinking about resiliency. That is where new museums and exhibit experiences are stepping up to bridge the communication gap in different parts of the world.

San Francisco- a city that spawned the birth of United Nations- is now leading the way towards ‘united nature’ with the unveiling of the vision for the world’s first comprehensive living museum dedicated to climate resilience and ocean conservation. The $260 million transformation of the existing 25 year old Smithsonian affiliated Aquarium, was hailed by First Lady Dr. Jill Biden as an important generational step in the right direction for educating and inspiring us to act. The 160,000 sq.ft iridescent bio-mimetic architecture is inspired by fish scales, Ohlone shell-mounds and rippling ocean waves. Situated a mile away from the historic Alcatraz prison, the climate ecotarium sits on a 3 acre green complex embedded with exhibits and powered with batteries, photo-bioreactors, wind and waves. Even as meta-narrative engages native American voices as the pioneers in environmental stewardship, the living museum engages the silicon valley tech talent in a string of learning platforms, machine learning and artificial intelligence tools, which has gained momentum in the post-covid contactless learning environments. At the heart of the climate museum is an enhanced salt-water aquarium that offers the ocean as a lens to a living lab. Meanwhile, in the Caribbean, a national $132 million oceanarium is in the works. Inspired by ocean geometry, organic forms of coral reefs and sea urchins, this incredible facility sits on the edge of the stunning ocean shoreline of Montego Bay in Jamaica. With direct sight-lines to the Cruise Ship terminal, three volumetric shells grow out of the ocean drawing with it a tidal rise of a kinetic waterfall, cascading down the panoramic sky-view of the “Blue Hope” restaurant. The mystic waterfall beckons the visitors arriving from the oceanside via water taxies, inviting a magical ride up the glass-pod elevators leading into the massive aquarium and living museum.

The 2.2 million gallon aquarium will hold about 30,000 animals and 300 species in immersive salt-water cones juxtaposed with fresh water jewel tanks, girded with engaging exhibits, with a solar-powered roof-top belvedere. A more spectacular project is unfolding in the Ocean City of Bergen in Norway that will pay homage to Ocean Conservation, Climate Resilience and future technologies ranging from Green Shipping practices to purging ocean debris.

On the eve of COP 26 as 166 world leaders gather with 30,000 delegates and an estimated 100,000 protesters, a unifying pledge to a lifestyle that minimizes, the use of plastics, pesticides, polluting the air with disregard to industrial standards, and other consumer habits, burning fossil fuels, discharging chemicals and solid waste into rivers, waterways, lagoons and the oceans- is the only path forward. With collective resolve, the tides can be turned to nurture nature for a better tomorrow. It is in our DNA.

Healthwire raises $3.3 Million to fuel its “Quality Healthcare for All” vision