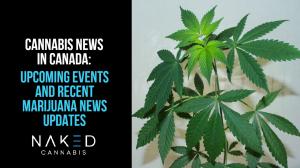 Recreational Cannabis is legal in Canada and has created quite the buzz in the country. Not all Canadian provinces are allowing people to grow cannabis at home.

BRITISH COLUMBIA, VANCOUVER, COLUMBIA, October 11, 2021 /EINPresswire.com/ — Recreational Cannabis is legal in Canada and has created quite the buzz in the country. With that said, not all Canadian provinces are allowing people to grow cannabis at home. Additionally, there are also rules around where the general public is allowed to smoke marijuana. All things considered, medical cannabis has been legal for a while now, and the cannabis scene is trending to be one of the hottest markets in Canada. So what’s going on in the cannabis news in Canada today? Here are five exciting highlights that are happening right now within the cannabis scene.

In 2018, Max Simon and Derek Gilman and longtime master cannabis breeder Kevin Jodrey got together to create a special program to train students in the more complex knowledge of cannabis. They called it The Ganjier Program. The program is designed to offer the Cannabis industry a deeper dive into the layers of customer experience and further customer education about cannabis.

The First-Ever Yukon Cannabis Competition is up And Running, With Local Growers Battling it Out Over The Next Several Months.
Canada’s legalization of cannabis has encouraged cannabis cultivation competitions to pop up in many provinces. Yukon Territory put on their first growers’ competition in early June of 2021 at the Yukon Tourism Trade Show, where growers displayed various cannabis buds and extracts.

The Yukon Cannabis Growers Cup is the territory’s first-ever cannabis growing competition, organized by the Friends of Cannabis. The Friends of Cannabis is a national organization with a mandate to advocate for the removal of cannabis prohibition. “They are planning several events dealing primarily with the cultivation of cannabis in Canada,” said President Ross McLeod in an article by Yahoo!News.

“We’ve had a great response with 30 to 35 entries from across the territory and most of them recreational users. Some of them are doing it mostly for fun. There are also several individuals from the medical community who have had experience in horticulture — these guys are quite serious about their work.”

Finalists Compete For A Cash Prize And Bragging Rights
Ross McLeod, the organizer of this year’s cannabis growing competition, lives in Whitehorse. He hopes that the event will help to reduce some of the stigma surrounding cannabis.

Each contestant received an identical kind of germinated cannabis seed. They can do whatever they want to produce a healthy plant by summer’s end. Dustin Rowe has been home growing cannabis for decades and found interest in the final plant a few years back when medical marijuana became legal. Since then, he’s been learning about the process and experimenting with his strain of cannabis plants. Now he’s joining others to see if he can take home top honors at the Yukon cannabis competition this fall.

“We are very excited to be running our first competition this year,” McLeod said. “We did this for the passion of growing and to stimulate the public’s interest in cannabis cultivation. This also gives us great feedback from the judges.”

Canada’s cannabis industry is poised for more explosive growth as companies continue to set records in pre-rolled joint sales. According to sales data from Ontario’s government-run pot retailer, Ontario’s budding pre-rolled cannabis market has soared to more than $100 million in sales in less than a year of business. The pre-roll joint category grew by 48 percent across the entire market between January and May 2021. Industry experts are predicting that the sales will continue to rise as more Canadian provinces start their recreational marijuana programs.

Exclusive Press Passes for Incubator Program to Meet Your Future Self

Exclusive Press Passes for Incubator Program to Meet Your Future Self

(Video) Iran: Raisi’s Cabinet and a Need for an Assertive Policy Toward Regime