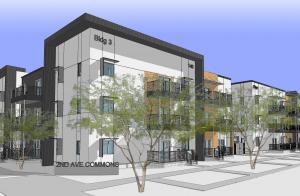 We are proud that Caliber’s Opportunity Zone Fund is leading the effort to redevelop Downtown Mesa.”
— John Hartman, Chief Investment Officer of Caliber

SCOTTSDALE, AZ, UNITED STATES, December 2, 2021 /EINPresswire.com/ — Caliber (CaliberCos Inc.), a vertically-integrated alternative asset manager and fund sponsor, announced today the beginning of its infrastructure work for The Commons of Mesa, a 144-unit workforce apartment community, located in Downtown Mesa which will be comprised of twelve three story buildings. Caliber plans to begin grading and site work before the end of the year.

The Commons of Mesa will contain 48 one-bedroom units and 96 two-bedroom units. It is located on 2nd Avenue between S. Robson and South MacDonald. The development sits on a 254-acre lot that is walking distance to Mesa’s downtown.

Starting in 2017, Caliber began acquiring a series of buildings in and around Downtown Mesa, Arizona, which now includes 10 buildings and 160,000 sq. ft of mixed-use space. “We are proud that Caliber’s Opportunity Zone Fund is leading the effort to redevelop Downtown Mesa,” says John Hartman, Chief Investment Officer of Caliber. The latest addition to this portfolio is this multi-family component, The Commons of Mesa. “This will further attract residents and workers to the downtown area,” adds Hartman.

As Arizona’s third largest city, Mesa ranks as one of the best places to live as it is known for its charm, diversity and affordable high standard of living. By national standards, Mesa is the 34th largest city in the US and one of the fastest growing cities. Its downtown area in particular, where The Commons of Mesa is located, has experienced a renaissance in the past few years with the introduction of light rail service, redevelopment of its historic core, and the new Arizona State University Campus at Mesa City Center. “WIth more than a thousand students, faculty and staff expected to join our new facility in the city center, I am very excited to see new housing options like The Commons develop,” comments Jacob Pinholster Founding Director, ASU @ Mesa City Center. “Downtown Mesa is such a vibrant and energetic place to be, and I expect The Commons to help new residents live closer to the action.” The campus is set to open in spring 2022, with its new state-of-the-art facility that will be home to the newly named Sidney Poitier New American Film School and various programs within the Herberger Institute for Design and the Arts.

“In addition to all the momentum occurring in Mesa, we are excited about the opportunity from an economic sense as the Phoenix Metro area currently leads the nation in rent growth 17% from June 2020-June 2021. Additionally, comparable rents within the Mesa area have risen to over $2 per square foot and cities population is expected to grow 6% by 2026, making the prospect of multi-family development extremely attractive,” continues Hartman.

The Phoenix Metro ranked first in net migration for the third straight year as the population grew by over 100,000 people in 2020, outpacing the markets 10-year average. Mesa currently has an annual growth rate of 2% and has seen its population increase by 22.5% since the 2010 census. Future job growth in Mesa over the next 10 years is projected to be 47%, far outpacing the national average. “The Commons of Mesa is strategically located to attract this new workforce,” concludes Hartman.

Caliber is raising equity for this project in the amount of $9M. The company will take on a construction loan from HUD for $32.5M. Caliber is co-developing this project with Cardinal Capital Management, a vertically integrated real estate development company that specializes in multi-family and workforce housing, who currently owns the site. Cardinal will make a contribution of $700K.

Caliber – the Wealth Development Company – is a middle-market alternative asset manager and fund sponsor with approximately $500 million in assets under management. The Company sponsors private funds, private syndications, as well as externally-managed real estate investment trusts (REITs). It conducts substantially all business through CaliberCos, Inc., a vertically integrated series of businesses that are strengthened by more than 70 professionals with decades of experience in commercial real estate, capital markets, alternative investments as well as mergers and acquisitions. The Company strives to build wealth for its investors by offering a diverse host of investment solutions that fit its investors’ optimal balance of risk-adjusted returns and attractive investment performance. Caliber primarily focuses on middle-market growth areas, such as Arizona, Colorado, Nevada, Texas, Utah, Idaho and Alaska. The Company assesses other markets that have similar supply and demand fundamentals with emerging population and job growth. Caliber delivers a full suite of alternative investments to a $4 trillion market that includes high net worth, accredited and qualified investors, as well as family offices and smaller institutions. This strategy allows the Company to opportunistically compete in an evolving middle-market arena for alternative investments that range between $5 million and $50 million on a per-project basis. Additional information can be found at www.CaliberCo.com and www.CaliberFunds.co.

“BICENTENNIAL PANAMA EVENT FASHION, ART & CULTURE” TO BE HELD IN PHILADELPHIA “THE CITY OF BROTHERLY LOVE”

“BICENTENNIAL PANAMA EVENT FASHION, ART & CULTURE” TO BE HELD IN PHILADELPHIA “THE CITY OF BROTHERLY LOVE”

5 eLearning Platforms That Give Harvard a Run for Their Money