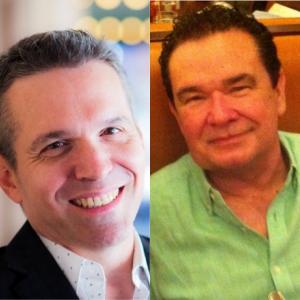 Borrowed was shot on location in Miami, Florida.  Directed by Carlos Rafael Betancourt and Oscar Ernesto Ortega, the film will feature Uruguayan actor Jonathan Del Arco (Star Trek: The Next Generation; Star Trek: Voyager) as David, a reclusive artist living in the secluded Florida Keys. His private and tortured life is changed forever when Justin, played by Cuban actor Héctor Medina (The Last Rafter, Viva), comes for a visit. When two strangers come together for what is to be only a brief encounter, each gets something more out of their time together than either could ever have imagined. As the two play a game of psychological cat and mouse with increasingly higher stakes, old skeletons come out of the closet in this thriller that explores themes of sexuality, fathers, sons, love, loss, and ultimately forgiveness.

Carlos Rafael Betancourt and Oscar Ernesto Ortega developed a common voice as they created EL CENTRAL, one of the first production companies in Cuba, with award-winning titles like La Isla de Corcho.  While Oscar relocated with EL CENTRAL in Miami, Carlos moved to Los Angeles to pursue graduate studies in film, becoming the first Cuban Directing Fellow at the American Film Institute, with the award-winning Thesis Film, Running Shadow. Carlos and Oscar joined forces one more time to write and direct their first feature film, The Last Rafter, and after a very successful festival run the film was acquired by HBO Max.

EL CENTRAL Productions (Carlos Rafael Betancourt/Oscar Ernesto Ortega), based in Miami Beach and Los Angeles and with more than 10 years of experience, provides services of writing, development, production, directing, cinematography and post-production. ​Carlos Rafael Betancourt is a Cuban filmmaker and AFI Directing Alumni based in Los Angeles, with over 10 years of experience in directing, writing and editing films, television and commercials. Stylized visuals, magical realism, nature and social drama visuals, intertwine in his work, like jigsaw puzzles combining pieces from different boxes.

Combining Cinematography Studies at the University of Arts of Cuba and working in the trenches of EL CENTRAL from Havana to Miami, Oscar Ernesto Ortega has focused in both technical and creative fields for over 10 years. Finding visual narrative in the most unexpected ways is the key element of his work as cinematographer and director. Clients include NBC Universal, Red Bull, Toyota, Cigna, Telemundo, Univision, Conill and Sony Music.

Broadway United was formed by Tony, Emmy and Pulitzer Prize winners and business partners Jim Kierstead and William Fernandez.  With over 20 years of producing experience between them, in the mediums of theatre, film, journalism and television, Broadway United is committed to creating quality content that promotes equitable participation across multiple mediums.

Broadway United is committed to developing and promoting the work of artists from equitable racial and ethnic backgrounds. They have relationships with Latin and Spanish speaking theatre companies across the country and have special ties to Latino communities in Miami and New York City. Between them, they have four Tony awards, one Emmy, and a Pulitzer Prize.

Cleanroom Consumables Market: Surge in Number of Patients with Infectious Diseases to Drive the Market Demand

Cleanroom Consumables Market: Surge in Number of Patients with Infectious Diseases to Drive the Market Demand