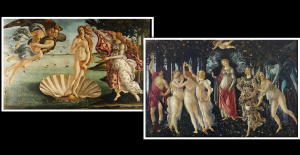 Birth of Venus and Primavera by Sandro Botticelli

TEL AVIV, ISRAEL, April 30, 2022 /EINPresswire.com/ — Today, a biblical website about the Ark and the Covenant is being launched in honor of Gal Gadot’s birthday. A-Interference.com is an experiential web portal that presents the world’s religions, witchcraft, and aliens; under one unified umbrella – God. The primary storyline of the site is that the sacredness of womankind is under attack by the corporate patriarchy, A.I., and advancing technologies. An ark needs to be built to protect womankind’s sanctity; and women’s cultures.

The portal reveals how aliens/God have been embedding messages in news articles, movies, and music videos, through interference; to look like an invasion- retaliating against man. One example is the helicopter crash death of Kobe Bryant and his daughter Gianna. The site’s creator, Peter Bonewitz, a former business intelligence analyst, says these interference messages are interconnected through a cosmic web – reaching back hundreds of years. “The strange events of the last few years needed to be pieced together”, Bonewitz said, ” and they’ve revealed something profound.”

The arc of the site’s allegory is that modern democracy is eroding society into economic collapse. The site reveals that Gal Gadot was chosen by God as the actual incarnation of Diana to help protect womankind from annihilation, and the oncoming apocalypse – Judgement Day. Bonewitz says “the gold wings on Gal Gadot’s helmet in WW84 are a reference to the Ark – and God’s covenant to womankind.” Bonewitz added that the bible left a secret message in Genesis, “the man shall have a helper comparable to him. And the only woman comparable to the son of God – is the daughter of God.”

Finally, Bonewitz says that the clues to God are all around us. “We all see bits and pieces of the cosmic web. It’s in songs that feel like are more than just a song – they feel profound,” said Bonewitz. “For example, Madonna’s, ‘Ray of Light‘ feels like something sacred. Then, our monotonous day-to-day lives remind us that it’s just a silly song. There’s no spiritual magic interconnecting us. It can be depressing.” But Bonewitz insists that “Ray of Light” is actually a sacred hymn meant by God to fit into a much bigger picture, the story of the ark and Apollo (Diana’s brother) – the son of God. “The song through the words Zephyr in the sky at night was meant as a through-line across eras and mediums, connecting to two famous artworks, Birth of Venus and Primavera by Sandro Botticelli. Together the music video, the song, and the art were meant to convey a deeper meaning about the potential of relationships, the Ark, and our connection to God. God has given us a giant map, instead of directly saying – this is what we think you should do”.

The website is free to the public. To view the site go to www.a-interference.com.

EuroNASCAR is only for the brave, Aliyyah Koloc celebrates victory in the Ladies Cup in her first race in the series

EuroNASCAR is only for the brave, Aliyyah Koloc celebrates victory in the Ladies Cup in her first race in the series

Newly Released in May, Prophet Tracy Cooke’s Latest Book Tells Believers How To Take Back Their Lives