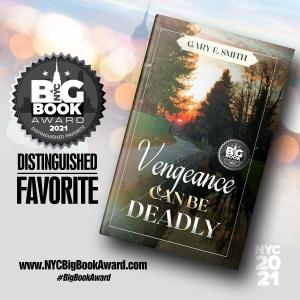 The NYC Big Book Award recognized Vengeance Can Be Deadly by Gary E. Smith in the category of Mystery as a distinguished favorite

In book five of the Warren Steelgrave series, Warren has settled into a comfortable life in a small village in Northern Italy. Suddenly all that changes. Having just left a dear friend, she is murdered, and he has become the prime suspect. Warren Steelgrave cared deeply for her and swears to avenge her death and clear his name.

Warren untangles a web of deceit, at first benign, then grown malignant by greed and evil. Professional criminals have become involved with international spies and mafia accomplices. Steelgrave’s sworn vengeance and “willingness” to find justice has put him and his loved ones in grave danger.

Travel down the dark alleyways of intrigue through Italy and the United States. Warren is warned: vengeance can be deadly. Will, there be justice and light at the end of this literary journey, or will the last chapter be Warren’s obituary?

Lastly Hachette Books, MacMillan, and Penguin Random House were among the large publishers that entered. “We are elated to highlight these authors’ books, recognize their excellence, and share their achievements.” said awards sponsor Gabrielle Olczak. “We look forward to showcasing these titles to a larger audience.”

Saints Safety MALCOLM JENKINS adds to his growing portfolio as a minority investor in the Premier League’s BURNLEY F.C.

Saints Safety MALCOLM JENKINS adds to his growing portfolio as a minority investor in the Premier League’s BURNLEY F.C.