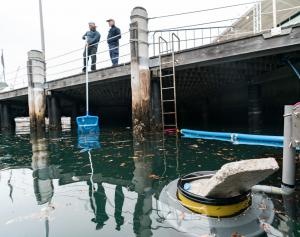 A Seabin unit at work

From a simple, innovative ocean trash skimmer to a global authority on ocean health Seabin is a start up with the goal of cleaning up 100 cities by 2050.

SYDNEY, NSW, AUSTRALIA, May 6, 2022 /EINPresswire.com/ — Australian clean-tech startup, Seabin, has today announced their first official global expansion, opening operations in Los Angeles. As part of their 100 Smarter Cities For Cleaner Oceans campaign, Marina Del Rey in Los Angeles has been selected as the first of three planned locations in the LA region as the second city after Sydney, Australia.

The Seabin unit is a “trash skimmer” designed to be installed in the water of marinas, yacht clubs, ports and any water body with a calm environment and suitable services available. The unit moves up and down with the tide, collecting all floating rubbish and skimming the surface of the water by pumping water into the device. A single Seabin unit can intercept floating debris, macro and micro plastics and even micro fibers, and a single unit can catch 1.4 tons of floating debris per year. The Seabin was recognised as one of the best inventions of 2018 by Time Magazine.

The expansion to LA is part of the startup’s vision of having an engaged presence in 100 cities around the world. Local team members will proactively work with the community, researchers, and corporations to obtain data and then support policy making and new legislation at the local, state, federal, and international levels to directly address the problem both in the water and on the ground.

“I’m extremely excited to launch our second city in LA and to have Marina Del Rey as our first location, followed by Port of LA and Long Beach. We spent weeks meeting the community, interviewing for positions related to the city pilot and speaking with corporates who want to support the Seabin x LA program, and everyone is simply brimming with positivity and enthusiasm to see these simple yet practical solutions come to LA” says Pete Ceglinski, CEO & Cofounder of Seabin.

“Our partners in Sydney now include brands like Discovery Channel, Ben & Jerrys, Yamaha, IBM and many more other corporates who are building enviro impact solutions into their operations, we are excited to do the same now in LA with local and multinational corporates” continues Pete Ceglinski.

The Marina Del Rey – LA city pilot will create up to five full-time employment positions over the three year term, and clean-up expectations are set at an estimated 54 tons of microplastics, plastic fibers and other items captured over the three year period.

“Our marina community has long advocated for cleaner water ways and would conduct clean-ups after each storm event we had using pool skimmer nets. When Seabin technology became available we were early adopters, installing three units in our marina in 2019. We have noticed a substantial difference in our water quality, generated community awareness and started great conversations about single use plastics. We are so excited to be the second city location in the world’s first 100 cities by 2050 campaign” says Bryan Plante, Marina Manager at Marina Harbor Anchorage.

Rather than lobby and pitch for financial support from the city, Seabin is launching a GoFundMe page to take action and start cleaning now. Currently Seabin has an estimated $150,000 pledged from American and multinational corporations, which will be used to create and drive momentum in the GoFundMe campaign.

Introducing Clanfinder.gg: Helping Gamers Connect While Contributing to Charities Around the World

Limor Zamir, Renowned Westside Real Estate Agent, Chosen As One of L.A.’s 100 Most Fascinating People of 2022

Samson’s Shadow and its Awakening

Introducing Clanfinder.gg: Helping Gamers Connect While Contributing to Charities Around the World

Limor Zamir, Renowned Westside Real Estate Agent, Chosen As One of L.A.’s 100 Most Fascinating People of 2022

Samson’s Shadow and its Awakening