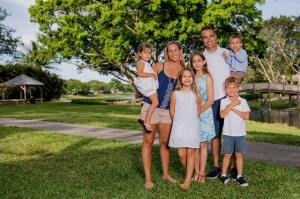 I’m so thankful for the support that our campaign has received. Our message is resonating and we are building the broad coalition that we need to win in November”
— Andy Thomson

BOCA RATON, FLORIDA, UNITED STATES, May 11, 2022 /EINPresswire.com/ — Andy Thomson, Democrat from Boca Raton, has been on a fundraising tear as of late and will report adding another $50,000 in his campaign for District 91 of the Florida House of Representatives. The $50,000 is based on new fundraising totals since his last public release.

The latest fundraising numbers will show $26,585.00 raised into his Andy Thomson campaign account for a total of $154,735. In addition, since his last public release, Thomson raised an additional $25,000 into his political committee, Running with Andy Thomson, bringing that total raised to $55,500.00. This latest haul will bring the total raised for his campaign to over $210,000.00.

“I’m so thankful for the support that our campaign has received. Our message is resonating and we are building the broad coalition that we need to win in November,” said Thomson.

In addition to this fundraising effort, the Thomson campaign has two fundraisers scheduled for the month of May, including a campaign kickoff on May 26 in Boca Raton. Andy has also secured the endorsement of fourteen elected officials, including current House District 91 Representative Emily Slosberg-King, in his bid for State Representative.

Andy was elected to the Boca Raton City Council during a special election in August 2018 and was re-elected without opposition in March 2020. Andy currently serves as Vice-Chair of the Boca Raton Community Redevelopment Agency that governs Boca’s downtown. He also serves on the governing board of the Palm Beach Transportation Authority. Before his election to the city council, Andy served on the Palm Beach County Transportation Planning Agency’s Citizens Advisory Committee, Vice-Chair, City of Boca Raton Education Task Force, and as a member of the City of Boca Raton Community Advisory Panel.

Andy graduated with a bachelor’s degree in electrical engineering from Georgia Tech, where he played on the Ramblin’ Wreck football team. He received his J.D. from the University of Miami School of Law. He practices law with the Boca Raton law firm of Baritz & Colman LLP, where he helps resolve business disputes. In addition, Andy is an adjunct professor at FAU, teaching local and state government. He met his wife Joanna during their first day of class at the University of Miami, and they have been together ever since. They were married in 2009 and are raising their five young children in Boca Raton. Andy coaches his kids in baseball, basketball, football, and soccer.